Harrogate and Northampton meet in England’s League Two on Saturday. Two of the division’s strongest teams face off in North Yorkshire. Read our free predictions and find the latest odds for the fixture below in our detailed match preview.

Two clubs battling it out for promotion clash at the EnviroVent Stadium. Read our top three predictions for this weekend’s fixture below.

Northampton are on a roll in League Two and the Cobblers’ kept hold of second place in the division with a superb 2-1 win at Exeter on Tuesday. That was Town’s third win on the bounce in the league and they became the first team to beat the Grecians on their own patch this term with their midweek success. Harrogate meanwhile, were smashed 4-1 at home by leaders Forest Green the same evening and with their confidence low, we recommend backing a Northampton team in much better shape in the double chance market.

Harrogate’s results have started to slide of late, though the Sulphurites have at least managed to hold on to some of their threat in the final third. Indeed, Simon Weaver’s troops have notched in six of their last eight League Two assignments, while both teams got in on the act in five of the same matches. That BTTS market looks like an interesting prospect again this weekend when Harrogate host a Northampton side that saw action at both ends in four of their last five league fixtures.

Sam Hoskins has two goals in as many games for Northampton and the 28-year-old’s most recent strike – on Tuesday evening – would have sent his confidence skyrocketing. Hoskins scored the winning goal for the Cobblers in their excellent 2-1 win at Exeter and with his self-belief fully charged, we’re backing the attacker to make his mark again against Harrogate.

Will Smith, Rory McArdle, Ryan Fallowfield and Aaron Martin make up a quartet of significant absentees for Harrogate this week. Defender Lewis Page returns from suspension, however. Town were dismantled 4-1 at home by Forest Green on Tuesday and the manner of their defeat is certain to have knocked confidence levels in their ranks.

Joseph Mills, Sid Nelson and Michael Harriman are all expected to be absent for Northampton on Saturday, while attacker Kion Etete remains a doubt. The Cobblers occupy second spot in League Two at present, though they are a full six points behind leaders Forest Green despite playing a game more than the title favourites.

Top Betting Odds and Stats for Harrogate vs Northampton 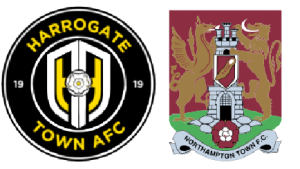 Harrogate vs Northampton is not being shown live on TV.

Saturday’s game will be the first competitive fixture between Harrogate and Northampton.