Harrogate and Stevenage meet at the EnviroVent Stadium for a League Two encounter on Saturday. Read our free predictions and find the best odds for the game below in our match preview.

Stevenage are in the midst of a dismal eight-match winless run ahead of their trip to take on Harrogate on Saturday. Read our top three predictions for this weekend’s fixture below.

Stevenage are caught in a powerful downward drift at present and their embarrassing 4-0 defeat at home to Forest Green last weekend pushed their winless run to a huge eight matches. On Saturday, Borough take on a Harrogate side that are among League Two’s early front-runners and The Sulphurites have yet to lose at the EnviroVent Stadium this term. At even money, the hosts are the outstanding choice to win this weekend.

Stevenage have been involved in numerous high-scoring matches in recent weeks, though most of the action has taken place in their own defensive third. Over 2.5 goals were scored in five of their last eight fixtures in league and cup and the same line could be passed when Borough’s brittle defence lines up against an incisive Harrogate frontline. With that considered, expect more net-shredding exploits in North Yorkshire.

Luke Armstrong is the most in-form member of that incisive Harrogate frontline. The 25-year-old summer capture hit the net again in Town’s 2-2 draw at Crawley last time out, taking his tally for the campaign up to six in just eight League Two appearances. Stevenage have one of the weakest looking defensive units in the division at the moment, so Armstrong should have chances to boost his numbers even further on Saturday.

Harrogate boss Simon Weaver has the luxury of a full complement of players to choose from ahead of Town’s latest League Two test this weekend. The Sulphurites have lost just one of their eight league tussles this season and they are winning 2.0 points per game at home on average so far. It’s still early days, but whispers about a genuine promotion push are starting to become more audible in North Yorkshire.

Charlie Carter sat out last weekend's heavy defeat to Forest Green and the midfielder could be absent again on Saturday through injury. Terence Vancooten will be missing from the same area of the pitch as he continues to serve a suspension for his sending off against Sutton United. Borough are in freefall at the moment and they could find themselves second last in the table if results go against them this weekend.

Top Betting Odds and Stats for Harrogate vs Stevenage 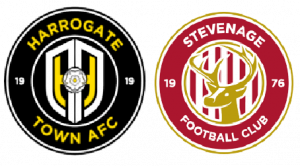 Can I watch the game on TV?

Harrogate vs Stevenage is not being shown on TV.

Saturday’s fixture between Harrogate and Stevenage will be contested at the EnviroVent Stadium.