Harrogate will host Sutton in their final match of the season in League Two and we have high expectations.

Harrogate and Sutton are two of the teams that have had the most goals this season and we expect a goal-packed fixture.

As mentioned above, these are two of the teams with the most goals this year. Harrogate had 137 goals in just 45 games and an average of 3.00 games per game throughout the entire season. Sutton had 120 goals and 2.7 on average per game. It is a fact that the teams played twice this season and both games ended with just 1 goal but this match will be different.

For some reason, Harrogate have been dominating in their last few games even though they had a terrible season and have nothing to fight for. They will not give in easily but Sutton are in desperate need of those three points and we expect them to find their way to the goal enough times to win it. They won three out of their last five games and overall have been in good form.

Neither of these two teams have great corner stats but there are some subtleties that make us believe we will see more than usual. Besides the importance of the match for Sutton, the team took an average of 6.00 corners in their last five games away from home. On the other side, Harrogate took an average of 4.20 corners per game in their last five home games in the league.

Harrogate are one of the most curious teams in the league. This is a squad with extreme potential but terrible defense. They are actually one of the top-scoring teams in the league with 64 goals in 45 fixtures. However, their defense is what kept them far from the promotion zone this season. They conceded 73 goals in those 45 games too, which is actually the second most in the entire league.

Sutton spent most of the season in the playoff zone until recently when they had a few bad results that put them behind. They remain below that milestone and have one final chance to get back up. They need the three points and a lot of luck – Swindon will have to draw or lose their final match too. Overall, Sutton also have one of the top attacks in the league and their goal difference is 67:53.

Top Betting Odds and Stats for Harrogate vs Sutton

FAQs regarding Harrogate vs Sutton 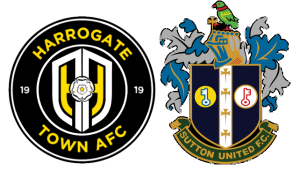 In which places are Harrogate and Sutton?

Harrogate will finish the season below the middle of the table as they are 17th now with 53 points. On the other side, Sutton are right below the playoffs at 8th place with 73 points.

This fixture has been scheduled for Harrogate's home ground – EnviroVent Stadium.