Harrogate will host Swindon in another match from the opening round in the new season in the English League Two on Saturday.

Harrogate had a rough last season while Swindon reached the play-offs and failed to promote themselves to the upper tier of English football. Here are our predictions for this game.

Harrogate and Swindon are the two teams that had the most goals out of the entire league in their games last season. While this suggests that we might see an over 2.5, we prefer to go for both teams to score in this fixture. Both sides can score goals but have had serious issues in defense, which is why we expect to see at least one goal per team here. The two games between them last season ended in 1:1 and 4:1.

Swindon were levels above Harrogate in the previous season but we see a completely different team at the start of the new campaign. Swindon had a terrible off-season and showed zero potential in front of the new season. The team played six friendly games, mostly against weaker teams from England and managed to lose four of them. Harrogate, in turn, were much better and they showed their true potential in attack. We expect a positive result for Harrogate at the start of the new season.

Harrogate took a considerable number of corners per game last season but their stats were not really impressive and we do not expect much from them. Swindon are not a team that allows a lot of corners but it is more important to mention that they do not take many either.

Harrogate never had great chances for the playoffs and their main problems last season have been in defense. Offensively, they have been one of the strongest teams even though they were in the bottom half of the table. Their defense, however, was actually the second-weakest in the entire league and we are not too sure if they had improved for the new season. They seem even better in attack but we will see.

Swindon looked like an obvious contender for promotion throughout the entire season and spend most season in the promotion zone. They reached the final rounds but failed to get promoted after some disappointing weak results. The team will attempt to get promoted once more this season although their form does not suggest that they will be a contender from the start of the season. This new campaign will be interesting, no doubt.

Top Betting Odds and Stats for Harrogate vs Swindon

FAQs regarding Harrogate vs Swindon 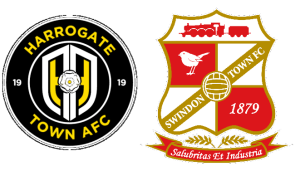