Hartlepool and Carlisle meet for a League Two encounter at Victoria Park on Saturday. Read our predictions and find the latest odds for the clash below in our expert match preview.

Hartlepool can climb into League Two’s automatic promotion spots with a victory over Carlisle on Saturday. Read our top three predictions for this weekend’s clash below.

Hartlepool are enjoying life back in the football league and the newly-promoted outfit could find themselves in League Two’s top three if results go their way this weekend. Carlisle meanwhile have strung together some uninspiring recent performances and they are worth opposing again when they visit a Pools side targeting their third successive home victory.

Carlisle’s early-season funk has been triggered by their lack of cutting edge in the final third. The Cumbrians aren’t being torn to shreds, though they have notched just three times in four League Two matches so far. Furthermore, their lack of punch has seen under 2.5 goals land in four of their first competitive matches this term and we expect their clash with Hartlepool on Saturday to be similarly low on action.

Drawing from the same logic as our second tip, the under 1.5 Carlisle team goals market jumps out at a price worth backing this weekend. That would have been a successful bet in four of the Cumbrians’ five assignments since the summer and with Chris Beech’s frontline showing little signs that they are about to sharpen up, the same market looks an appealing prospect on Saturday.

Lower-league promotion expert Dave Challinor led Hartlepool back to the EFL last season and Pools have started life back in League Two in positive fashion. Hartlepool have taken six points from the first nine on offer and it’s worth noting that they have collected all of their wins so far at Victoria Park.

Carlisle had threatened to push for a playoff place last season before they fell away later in the year and the Cumbrians have looked flat again in early exchanges of new campaign. Scoring goals has been a real problem, and though their strong defence has allowed them to keep their unbeaten start intact, though their record won’t survive for much longer if they fail to improve in the final third.

Top Betting Odds and Stats for Hartlepool vs Carlisle 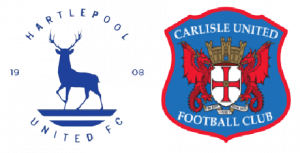 Saturday’s game will be played at Victoria Park.