Hartlepool take on Mansfield in another postponed game from the 30th round in League Two.

Hartlepool continued their strange performances – each week, they get a different result, often unexpected. Mansfield, in turn, scored the second win in a row and are getting closer to their goal – getting back to the promotion zone.

Hartlepool and Mansfield had loads of goals in their recent games and we expect to see another incredible goal-packed fixture, especially given their past. Four of the last five head-to-head games between these two sides ended with more than 2.5 goals. The first one of this season, for instance, had the whooping 5 goals at full time. Mansfield score loads of goals almost each game but they also concede a lot and given that Hartlepool are strong hosts, we expect to see both sides with goals.

Mansfield have taken the task to get back in the seven best quite seriously given that they won their two most recent outings while they have generally been one of the worst away teams in the league. Hartlepool, at earlier stages, were among the top home teams in the league but now, they haven't won in three consecutive games. We expect them to lose again or reach a draw at best. While both teams have mathematical chances for the play-offs, Mansfield are 10 points closer and this match is much more important for them.

Hartlepool have had a most curious season. Until recently, they were one of the best home teams in the league while they were among the three-worst away teams. Now, this has changed and they won three of their last five outings but at home, they haven't won in three consecutive games. The team is 12 points below the promotion zone with 8 games left to play, so basically, their chances are almost inexistent.

Mansfield had a bad start to the season and then exploded with a months-long streak of defeatless games, which put them among the best in the league. Now, they need all the points they can get to get back to that top position before the end of the campaign. They have been fortunate with postponed games and now have to play two or three additional games to most of their contenders, so their position is quite good for the play-offs.

Top Betting Odds and Stats for Hartlepool vs Mansfield

FAQs regarding Hartlepool vs Mansfield 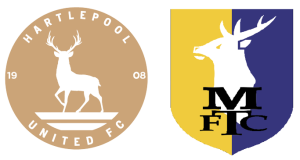 In which places are Hartlepool and Mansfield?

Hartlepool and Mansfield had their ups and downs but overall, their seasons have been different. Right now, Hartlepool are 13th with 51 points while Mansfield are 8th with 62 points.