The last game of the 20th round of League Two is between Hartlepool and Rochdale – two teams in the middle of the table that have an equal chance to grab the three points in this game.

Until the last two rounds, Hartlepool were the best home team in the league – that is, they hadn't lost in 7 home games. This has changed now and in this game they will face Rochdale, who have surprisingly been quite good away from home.

Hartlepool have conceded a lot of goals this season – in fact, more than 21/24 teams in the league, even more than teams below them in the standings. It is a complete mystery how they managed to perform so well at home until recently. In each case, we expect to see goals from both sides in this match. Hartlepool are in terrible form – the team has lost 5/5 recent league games, both home and away.

It is a fact, however, that they score a lot of goals at home and have done so in all of their games to date. On the other side, Rochdale have had an incredible number of BTTS games if we are not counting the two 0:0 draws. We expect to see a goal-packed game here and the odds are surprisingly high for such a matchup.

As mentioned above, Hartlepool are not having a good month. Rochdale have generally been quite good – they lost just 2 matches in their last 10 in all tournaments, and those two were for the English cups. The team has seen a huge improvement away from home and has not lost in 5 consecutive games, 4 of which were in League Two. Hartlepool might have been the best home team until recently but this has changed and we expect the visitors to get something from this match.

Most of Hartlepool's recent games have had over 2.5 goals. The same goes for Rochdale, with the small difference that they scored most of the goals. In quite a few cases, the team scored more than two goals. Hartlepool conceded at least twice in all 5 recent league games, all of which were lost. We expect to see both teams score here but Rochdale to score over 1.5 goals.

Top Betting Odds and Stats for Hartlepool vs Rochdale

FAQs regarding Hartlepool vs Rochdale 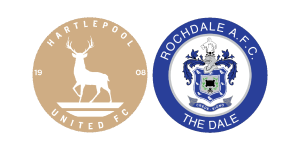 • In which places are Hartlepool and Rochdale?

Hartlepool are an incredible case – one of the best home teams and the absolute worst away team in the league. It is only due to their wins at home that they are not in the relegation zone – currently, they are 17th with 23 points. On the other side, Rochdale are 13th with 24 points.

This game has been scheduled for 19:45 UTC on December 8, Wednesday.

This match will be played at Hartlepool's home ground – Victoria Park, which has a capacity for 7,865 spectators.