Hebei take on table-topping Shanghai Port in a Chinese Super League fixture on Thursday. Read our expert predictions and find the latest odds for the contest below in our match preview.

Leaders Shanghai Port have won three of their last four matches ahead of their trip to take on Hebei. Read our top three predictions for this week’s contest below.

Shanghai Port are the early front runners in the Chinese Super League, though the pace setters have been far from convincing on the road this season. The Red Eagles have swooped in for three points just twice in six away assignments so far and on Thursday they face a Hebei outfit that have yet to taste defeat on their own patch, despite hosting several fixtures against the Super League’s best teams. With that impressive record considered, we recommend backing Hebei in the double chance market this week.

Both teams to score has landed in four of Hebei’s last six home matches and in four of Shanghai Port’s last six away tests and bettors could be rewarded again with a wager in the same market on Thursday. Hebei have notched in 83% of their home fixtures in 2021, while Shanghai Port have scored at least once in 83% of their matches overall. Expect action at both ends when these consistent goal-getters meet at the Suzhou Olympic Sports Centre Stadium.

Hebei carry a three-match winless streak into Thursday’s game and their 3-0 reverse at Changchun Yatai last time out was their biggest defeat of the season so far. At home, the picture is much rosier for coach Kim Jong-boo however, who seems to be turning the Suzhou Olympic Sports Centre Stadium into a fortress in his first campaign in the hotseat.

While they still have some wrinkles to iron out on the road, Shanghai Port’s start to the 2021 season in China has largely been very positive under new Croatian boss Ivan Leko. The Red Eagles have won seven of their first 12 games, netting an impressive 25 times along the way. Their comfortable 3-0 triumph over Wuhan in their last match was their third victory in four fixtures.

Top Betting Odds and Stats for Hebei vs Shanghai Port 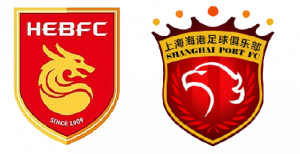 Thursday’s game will be played at the Suzhou Olympic Sports Centre Stadium.

The bookmakers have priced league leaders Shanghai Port as favourites to beat Hebei.