Heidenheim stepped up their game and with a series of positive results in recent weeks have now joined the promotion race. Regensburg remain near the top of the league but lost twice in recent weeks, which means that losing this fixture against Heidenheim could have a serious impact – plus, it will put them side by side in the standings.

Heidenheim's season has been a rollercoaster of ups and downs. The team started the season strong, then had a series of bad results, then a few good, then bad. They had problems with Covid-19 but now seem to be back on track.

Regensburg have been having certain issues away from home. Not counting the win against the weakest team of Ingolstadt, they have not won a match away since August. Heidenheim, on the other hand, are among the best home teams in the league and have lost just once in 8 rounds. They even recorded some wins against strong sides like Schalke and Darmstadt.

We know that Regensburg is the better team overall but they will face some difficulties against Heidenheim, who have been listed as a strong favorite for this match. They are just coming out of a bad series of games and won their two recent matches against Dusseldorf and Holstein, who are not among the strongest teams. Regensburg will be a much more difficult challenge and we expect to see a draw.

Both sides will be very motivated to win this match, so we expect to see action from both teams and at least one goal per side. Regensburg's recent matches have all been extremely goal-packed with results like 3:1, 4:1, 2:3, etc. The team scores a lot of goals but they also concede just as many. Heidenheim have scored at least one goal in almost all of their home games this season (apart from two 0:0 draws at the start of the season).

Heidenheim are one of the top teams for corner bets. Few sides have been taking as many as them and we believe that this match will be no different. Heidenheim have been taking an average of 7.00 corners in their last 5 games and their all-season stats are quite similar – 6.73 corners on average. If you prefer to bet on total corners in the match, the over 9 line is perfect for a combination with goals or a match result. Regensburg will add up to the total count with at least 3-4+ corners, as their average corners taken this season is 4.47.

Top Betting Odds and Stats for Heidenheim vs Jahn Regensburg

FAQs regarding Heidenheim vs Jahn Regensburg 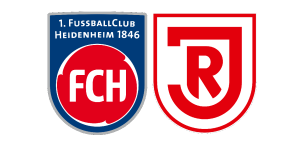 • In which places are Heidenheim and Regensburg?

The teams are separated by just 4 points currently. Regensburg remain in the top 3 teams at 3rd place with 28 points while Heidenheim are 8th with 24 points.

Regensburg have one of the strongest attacking players in the league and this is evidenced in the number of goals the team scored to date – 33, while they conceded 20. Heidenheim are quite the opposite – only 16 goals scored with 20 conceded, which means that they have a negative goal difference.

This fixture has been scheduled for 12:30 UTC on Sunday, December 5.