The Europa Conference League kicks off this week with a Group A matchup between HJK and LASK. Both sides will want to get off to a perfect start with a win.

Soccer predictions at FGG contain no bias and have been researched using the latest team stats, news, and available data. Here is how we are tipping HJK vs LASK.

The slight underdog heading into the match, HJK enter the match in much better form than opponents LASK. Sitting atop of the Finnish League, HJK has won two of their last four and have a healthy six-point lead over their nearest title challengers. Lask has started their league campaign slowly – sitting 11th with only one win out of their seven matches so far this season. It's difficult to back the Austrians as they are in desperate need of a win and this could be a tricky away tie for them.

We fancy this game to be a relatively low scoring one between the two favourites in this group. HJK has been involved in some recent cagey matches with five of their last eight encounters witnessing less than 2.5 goals. LASK have a similar story to tell with five out of their last six matches also ending under the 2.5 goal mark. Backing under the 2.5 goal barrier could be a sensible way to play here.

HJK to win and under 2.5 goals

HJK successes so far this season has come off the back of a mean defence, the Finnish table-toppers have conceded the least goals in the division by some margin only conceding nine in their 19 games played so far. They also have a habit of grinding out victories, winning three of their last five league games 1-0. Looking to repeat the formula here, a HJK match victory and for there to be less than 2.5 goals scored in total returns a nice 5/1 price.

Match Preview for HJK vs LASK

This opening group fixture represents a tricky start for both teams who are the firm favourites to qualify from a group that also includes Maccabi Tel-Aviv and Alashkert. HJK are looking to secure a third Finnish title in the last four years and currently hold a six-point lead at the top of the table, a difficult team to break down, HJK has only conceded five league goals at home all year. They do pack a punch with midfield maestro Jair netting in HJK's last two matches. Look for the Brazilian to give the LASK defence a difficult night.

LASK has developed a strong European pedigree in the last two seasons, qualifying from the Europa League group phase before losing to Manchester United and Tottenham Hotspur. The start to this season's Austrian Bundesliga has been nothing short of disastrous with LASK sitting in 11th place and bottom of the form table. They have scored a league-low 5 goals across the seven league games they have played so far and will be needing much more from their attacking players to trouble a stern HJK defence. 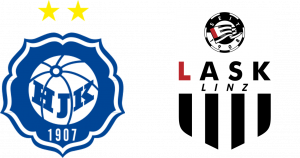