The Indian Super League action continues at a frenetic pace brings as Hyderabad take on Odisha. This is a contest between the 4th and 7th placed teams in the league and a win here for either side could see them climb as high as second in the table and place themselves firmly within the top four playoff picture.

Despite the differences in the table between the teams the sides are only separated by two points. Both sides head into this match with some iffy recent form. Hyderabad have only been able to win two of their last five matches, but are a tough side to beat and are unbeaten in their last six, a run that contains three wins and three draws. Odisha have worst form having won only one of their last five. This is a tough match to call and should be competitive which is why we are going to be siding with the draw here.

It’s clear to see why both teams have struggled for winning consistency this season, as both teams are struggling to keep clean sheets. The betting angle for the over or under 2.5 market is a really tough one to gauge and could go either way, however we will side with the under 2.5 goal mark here. Hyderabad in only one of their last five games have seen over 2.5 goals occur, whilst the over 2.5 goal mark has been exceeded in three of Odisha’s last five matches. When these sides meet the over 2.5 market has been exceeded in two of their four head to head contests, emphasising how tight this one is to call.

The Best Match Odds for Hyderabad vs Odisha 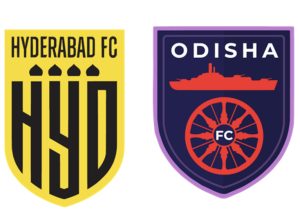 This game will be played at the home of Hyderabad at the GMC Balayogi Athletic Stadium.

Javi Hernandez is a Spanish midfielder who plys his trade for Odisha and has managed to find the back of the net four times and provide two assists in the 7 league games he has contested so far.

What is the kick-off time for Hyderabad vs Odisha?