The South Korean league continues on Sunday with two games – Incheon vs Gincheon Sangmu will be the early fixture.

Incheon and Gimcheon started the season well and have had similar performances to date. Gimcheon are actually one of the new teams in the league, so their start is rather surprising.

The K1 League is not famous for its goal-packed games so in other words, it is rare to see games with a lot. We do not expect to see this in this upcoming match either. The starts of both teams this season are good enough to make us believe that there will be one or two goals maximum here. For example, all four of Incheon's games either ended in 1:0 or 1:1. On the other side, Gimcheon had less than 2.5 goals in three out of four games. It is true that these two teams have a lot of history between them and most games actually had a lot of goals and both teams scoring. However, we do not expect to see more than 1:1 in this match.

This match is not suitable for a match result bet because both teams have the same chance to win this. At the same time, we expect a low-scoring game, so we would rather go for the great odds for a single goal for Incheon. The team was one of the best at the end of the previous season and their stats were actually quite impressive. If we combine the new season with the last months of the previous campaign, Incheon had not had a match with over 2.5 goals in 15 games. They also scored more than 1 goal in just 1 of those last 15 games. Gimcheon's defense is strong, so we expect the hosts to have a maximum of one goal.

The good thing about the Korean league is that the corner markets are quite lower than anything we are used to in European Leagues. Team in Korea generally do not take too many but Incheon and Gimcheon are quite the opposite. In their first four games this season, Incheon took an average of 5.00 corners while Gimcheon took an average of 4.75. These stats are in full support of our low line of over 7 corners. This game should have at least 9 or 10 without a problem. 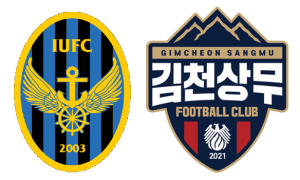 In which places are Incheon and Gimcheon Sangmu at this point?

Both teams have had the same start to the season – 2 wins, 1 draw and 1 defeat. This means that they both have 7 points. Gimcheon are 3rd due to the better goal difference while Incheon are 5th.