An intriguing match in the Scottish Championship is set to be played between two teams at differing ends of the table. Inverness in third host Ayr who find themselves in 8th just two places above the relegation zone. Both need three points if they are to maintain their challenges at the top and bottom of the tables.

When it comes to form Inverness have had a really tough time of late having only picked up three points from the last fifteen available, Ayr have fared a little better having won five from the last fifteen available. For Inverness it’s draws that have been the problem with the highland side having drawn three of their last five. Ayr come into this match off the back of a 2-1 win against Kilmarnock which has given their survival hopes a real boost. Inverness have the third best home form in the league whilst Ayr have the worst away record. It might be a risk but we fancy Inverness to her back on track and record a vital win here.

Inverness have scored at least once in their last five home meetings against Ayr and have scored two on two of these occasions. Ayr haven’t kept a clean sheet away from home in any of their last nine matches. The smart play might be on Inverness to score over 1.5 goals at a price of 6/5.

Backing both teams to score could be one of the sensible bets in the match. Three of the previous five head to head encounters between the sides have seen both teams find the back of  the net. Inverness haven’t kept a clean sheet in any of their last five home games whilst Ayr have scored in three of their last five away games. With both teams struggling at the back this could be one of the better bets in the match.

The Best Match Odds for Inverness vs Ayr 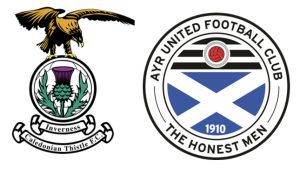 This game will be played at the home of Inverness at the Tulloch Caledonian Stadium.

Inverness have won two of the last five with there being three draws.

What is the kick-off time for Inverness vs Ayr?