Jeonbuk have had a shocking start to the season after they won the title in the previous campaign – the team has been one of the weakest sides to date. This is the perfect fixture for them to improve and win against a team that just got promoted to the league.

Most of the matches since the start of the new season had less than 2.5 goals and we expect to see another one of these games. To date, GImcheon have had a single over 2.5 game in five while Jeonbuk have not yet had an over 2.5 this season – 0/5. Most games between these two teams over the years have also had less than 2.5 goals.

As mentioned, this should be the perfect opportunity for Jeonbuk to get back to the winning games. They have always been the better team in head-to-head games than Gimcheon and especially at home – they have won nine of the last ten games they played at Jeonbuk's stadium. The hosts have been the lowest-scoring team since the start, which has been shocking after the previous campaign three months ago but still, we expect them to win against Gimcheon.

Jeonbuk destroyed the league in the previous season and won with 76 points after 38 games. This season, however, they started with a single win in five games and have been quite disappointing overall statistically. It is still early in the season but nobody expects them to be a serious contender even after just a few rounds.

Gimcheon managed to get back to the elite after an incredible performance in the previous season. Surprisingly, they have also started the new season quite well and are among the best teams at this point. Overall, nobody expects them to be a contender and this good start will probably not continue performance-wise throughout the entire season. 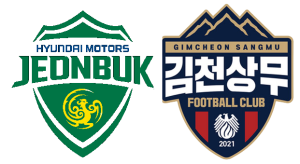 In which places are Jeonbuk and Gimcheon?

After five rounds, Jeonbuk are almost at the bottom of the league – they are 11th with 4 points. Gimcheon have been much better and are 5th now with 7 points.

This game will be played at Jeonbuk's home ground – the Jeonju World Cup Stadium.

This match will start at 10:00 UTC on Saturday.