Jubilo Iwata will host FC Tokyo in their game from the 13th round in the Japanese J League 1.

FC Tokyo have been performing much better than the original expectations but after two recent defeats, they will be motivated for a positive result against a weaker side.

We have two completely different teams here but we expect to see at least one goal per side and an unexpectedly interesting fixture. Curiously, these two teams already played twice this season for the Japanese Cup and one match ended in a 0:0 draw while the home game for Iwata ended in a 2:1 win. We expect a similar result to the second game.

Curiously, Tokyo are the favorite to win this game. Yes, they are much higher in the table overall but their away performance shave been nothing short of terrible this season. The team has not won in five consecutive away games and their results were mostly defeats. Iwata, in turn, have been surprisingly strong at home and have not lost a match in six consecutive home fixtures. They already beat Tokyo once for the cup and we expect a second win here.

While it is a fact that FC Tokyo have been having a bunch of corners in their games overall, we expect a game with less than the usual. This is mainly because Iwata have had the fewest corners out of the entire league – an average of 7.00 per game total. Moreover, Iwata have taken an average of just 2.40 corners per game since the start of the season.

Iwata are one of the teams that got promoted to the elite this season and they did not start the campaign in the most positive way. There is a lot of room for improvement but there is also a long season ahead, so we might see them get better over time. They won only two of their first 12 fixtures in the league and have had some of the most extraordinary results. After 12 games, the team has a goal difference of 15:20.

FC Tokyo were not among the great teams last season and finished 9th with 53 points after 38 rounds. This season started in a much better way apart from the two most recent defeats that put them behind the leaders. The team has been quite solid overall and might surprise us in the remainder of the season. After 12 rounds, they have a goal difference of just 11:11.

Top Betting Odds and Stats for Jubilo Iwata vs Tokyo

FAQs regarding Jubilo Iwata vs Tokyo 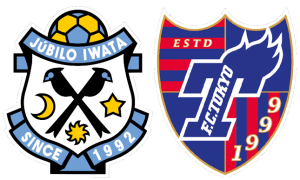 In which places are Iwata and Tokyo?

These two teams are currently sitting on the opposite ends of the table. The hosts are 16th with 11 points while Tokyo are 6th with 18 points.

This fixture has been scheduled for Iwata's home ground – Yamaha Stadium.

This game has been scheduled for 5:00 UTC.