In this Besta-deild karla fixture, KA Akureyrar takes on the challenge of IBV Vestmannaeyja at the Akureyrarvöllur. Both sides earned draws in their last league outing and will want a positive result to arrest their declining fortunes.

IBV to Win or Draw

Neither KA nor IBV can be backed to claim the three points on offer. Both sides are struggling to give their best and have been out of sorts in recent weeks. Akureyrar only won once in their last five outings, while the visiting Vestmannaeyja has registered successive draws. There is value to be had in backing IBV in the double chance market and it is our pick given the coverage it gives.

The falling fortunes of KA and IBV can be attributed to their poor scoring efficiency. KA has only scored thrice in their last five outings while IBV's tally is one goal worse. With both sides struggling, we expect to see an Under 2.5 Goals conclusion to this match at Akureyrarvöllur.

The last six competitive outings including KA have seen goals at both ends of the pitch. On the other hand, BTTS has failed to come true in three of IBV's last four outings. Given both sides' poor scoring form, it difficult to back goals on both sides of the pitch. However, if you add the fact both sides have been struggling at the back and it comes closer to being a reality.

It has been a tiresome time for KA Akureyri fans, who have seen their side drop 13 of the 15 points available. They need a positive result and against IBV Vestmannaeyjar they can realize it. Arnar Grétarsson needs to rouse his attackers from their slumber as their return of five goals is not worthy of a team fighting in the top-four.

While KA fight for honours and top billings, IBV Vestmannaeyjar's fortunes are in stark contrast. They have seen their season go from bad to worse with every passing weekend. IBV are winless in their last 11 outings, averaging 0.8 goals per match. Helgi Sigurðsson has a tall order on his hands to keep them in the Icelandic top-flight football and it seems he is fighting a losing battle.

Top Betting Odds and Stats for KA vs IBV

FAQs regarding KA vs IBV Coverage and Accessibility 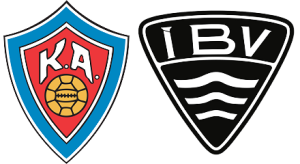 Where is the game being played? Akureyrarvöllur (Akureyri).

Who won the last Head to Head fixture? KA won with a 0-3 scoreline.