The inaugural Europa Conference League kicks off this week, with a match between Kairat vs Omonia Nicosia. In a group that contains Qarabag and Basel, both sides will be looking to kickstart their campaign with a victory.

Soccer predictions at FGG contain no bias and have been researched using the latest team stats, news, and available data. Here is how we are tipping Kairat vs Omonia Nicosia.

As mentioned above, these two sides have recently been in games that have seen goals galore! Kairat in their last five successive matches has seen the over 2.5 goal target being comfortably hit and Omonia have met the 2.5 target in four of their last five games.

Kairat to score their first goal in the first half

Kairat in their last five matches has scored totals of 1, 3, 4, 4 and 2. They have scored first-half goals in four of these five matches. Being at home and looking to get off to a fast start we are backing Kairat to score their first goal in the first half.

The matchup between Kairat and Omonia Nicosia is exactly what the Europa Conference League was designed for. It is intended to give teams from smaller European footballing nations the opportunity to proceed deeper into European tournaments. Kairat and Omonia are in a tricky group with both Qarabag and Basel who are regular contenders at this sort of level. Kairat has a striker that will be recognised by many European football fanatics in Vagner Love. Vagner Love has found the back of the net three times this season and Kairat will be hoping that he can get them off to a great start in matchday one. 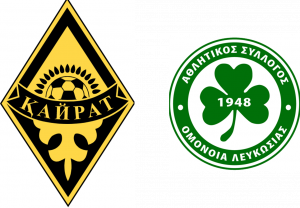 The match will be played at Almaty Ortalyk Stadion in Almarty.

This will be the first time these sides would have met