Tuesday see’s a fascinating matchup in Bundesliga 2 as 10th place Karlsruher take on 16th place Sandhausen. Sandhausen are on a good run that has seen them boost their survival hopes a win here could see them move as high as 14th in the table. Karlsruher are sitting safe in mid table but if they have any aspirations of finishing higher up the table they need to be winning matches like these.

It’s Sandhausen who come into this matchup in better form after having taken eight points from the last fifteen available. It’s a run that has seen them win two, draw two and lose one of their last five contests. Karlsruhe have struggled a little only being able to pick up five points from a potential fifteen, Karlsruhe’s slide down the table has seen them starting to glance nervously over their shoulder as they only sit six points off the relegation playoff places and they know a defeat here will bring them right into the relegation mix. Considering that Sandhausen are in better form we like the double chance option for them. Priced at 4/5 to win or draw that’s a bet we think is a good value play.

Karlsruher dominates the head to head having won four of the last five meetings between the pair. However the last time these two squared off, the match ended in a stalemate 0-0 draw. This is a big game for both teams and we think it could take a while for the game to open up and 6/5 for the game to be a draw at half time is a bet we really like.

The Best Match Odds for Karlsruhe vs Sandhausen 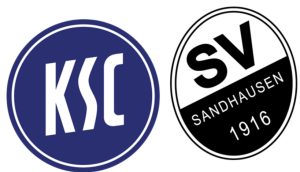 This game will be played at the home of Karlsruher at the Wildparkstadion.

What is the kick-off time for Hyderabad vs ATK Mohun Bagan?