Kawasaki To Score in Both Halves

Kawasaki Frontale will face Iwata in the 18th round of the Japanese elite football league on Saturday.

The champions will continue their pursue of another championship against a convenient opponent that has been performing in a bad way overall.

When it comes to goals, these are among the teams that have had the highest averages in the entire league. Iwata, as one of the weaker sides, have had an average of 2.8 goals in their matches. on the other side, Kawasaki Frontale have had 2.6 goals in their matches on average. Despite their overall bad results, Iwata have a strong attack and score goals in most of their matches. We expect to see them net one in this fixture as they did the first time they played against Kawasaki Frontale as hosts.

Team To Score In Both Halves – Kawasaki Frontale

The odds for Kawasaki Frontale to win are too low to be considered for betting. For this reason only, we pick an option that has great value – Kawasaki Frontale to score in both halves. They may not have been as strong as in the previous season but the team remains a contender for the title and they can score a lot of goals. Iwata's defense has been the weakest in the entire league with 26 conceded goals in 17 fixtures.

When it comes to corners, there is no better option than Jubilo Iwata for an under bet. No other team has had such low stats in the league this season. Iwata have taken an average of just 2.6 corners per game in their matches and the overall averages of their matches is just 7.4 – the lowest in the entire league. Yes, Kawasaki Frontale have taken more corners and their average is 8.9 but we do not expect anything from Iwata in this match.

Kawasaki Frontale won the championship last season with a huge difference over the 2nd but the new season started in an unexpectedly bad way. Seventeen rounds in, the team has already lost twice as many games as in the entire last season. Of course, their form improved and they became a contender for the title once more but this season will not be as easy for them. Their defense needs to improve and their attack is nowhere near its past glory.

Jubilo Iwata got promoted back to the elite at the start of the new season and nobody had huge expectations for this team. They have good results from time to time and their offense is surprisingly effective but overall, they are one of the weaker teams. As mentioned above, Iwata have the weakest defense out of the entire league. Kawasaki Frontale failed to win the first duel but we expect to see Iwata lose this second fixture. 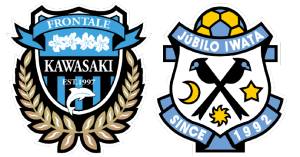 Obviously, they are on the opposite ends of the table. Kawasaki Frontale are 3rd with 33 points while Iwata are 14th with 18 points.

This fixture has been scheduled for Kawasaki Frontale's home ground – Kawasaki Todoroki Stadium.