The third of our Scottish Championship previews comes from Rugby Park as two teams from the west of Scotland prepare to lock horns as Kilmarnock host Ayr United. Kilmarnock have seen their lead at the top of the table reduced and now find themselves four points behind Arbroath. Ayr occupy 10th spot in the table and are firmly in the relegation mix. With just three points separating them and Hamilton in sixth, any win that Ayr can muster will be crucial for their survival hopes.

Kilmarnock head into this match ranked third in the form table and know that they need to win this game to try and reduce the four-point gap between themselves and top of the table Arbroath. Kilmarnock’s home form has been their undoing this season as they have only picked up 16 points out of a possible 30 which leaves them with just the 6th best home record in the league. They prepare to welcome Ayr who have the leagues worst away form having only picked up six points on their travels all season – Ayr are also without a win in their last five matches. Odds of 7/10 for a home win isn’t a price to write home about but considering Ayr’s dismal form on the road could be one of the more solid options available in a match where value is hard to find.

Despite Ayr having the second-worst defensive record in the league, they manage to keep things tight whenever they come up against Kilmarnock, none of the last five matches between the teams has seen over 2.5 goals and we think that could be a good way to play here. Kilmarnock’s troubles at home centre around the fact that they have only scored 12 goals in front of their fans all season which needs to significantly improve if they are to mount a serious title challenge. Ayr away from home has only scored 7 times which helps lend its support to wanting to back the under 2.5 goal market here.

Kilmarnock to keep a clean sheet

Considering Ayr have the worst goalscoring stats away from home having only scored 7 goals all season it might be worth backing Kilmarnock to keep a clean sheet at 11/8. Killie have been able to record clean sheets in two of their last five matches and have only conceded 8 goals at home all season. Against a shot-shy Ayr United, they will want to keep that impressive record intact.

The Best Match Odds for Kilmarnock vs Ayr 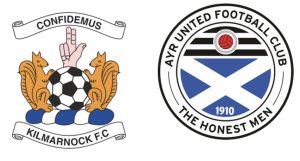 This game will be played at the home of Kilmarnock at Rugby Park.

The last five meetings between the teams have seen one draws, three wins for Kilmarnock and one win for Ayr.

What is the kick-off time for Kilmarnock vs Ayr?