Konyaspor of Turkey go head to head with BATE Borisove of Belarus in the second leg of the 2022 Europa Conference League qualifiers. The first leg was a massive win 3-0 win for the Turkish side. Will they get another victory at home in the second leg? Read further to find out.

Konyaspor has massive 3 points and a 3-0 goal gap ahead of the second leg. For the hosts, this second leg will be about putting the match to bed but will they do it? Here are our best three picks for the match:

Konyaspor’s massive win of 3-0 in the first leg will be their catalyst in the second leg. With expected massive home backing, the hosts will be the first team to score in this second leg. With no win in four games now, things seem to be getting worse for BATE, and a game in Turkey will is a pipedream.

Another potential win for Konyaspor is on the cards. They overcame the odds of a red card to score two more goals in the first leg. The red card issue will have been fixed, in which case, we expect a full squad to play this game for the hosts.

We also expect Konyaspor to score at least twice in this second leg of the Europa Conference League qualifiers. They did it on the first leg, so a home game comes with the right conditions to score even more. Note that BATE conceded at least two goals in each of their last three games.

Konyaspor will be without Urgucan Yazgili who picked a second leg yellow card in the first leg. However, it seemed that didt have much impact on the team as they still went ahead to score two goals after the send off to win the match 3-nil. This home game in the second leg will be important for the hosts. They have 3 wins, one draw and one loss in their last five home games. Notably, Konyaspor only kept one clean sheet in their last five home games, which should be a concern for the hosts if they are to bag a second win in the qualifier match against BATE.

BATE Borisov’s humiliating defeat of 3-0 in the first leg of Conference League qualifiers make them a worried lot ahead of this trip to Turkey for the second leg. The visitors have now lost twice in a row, scoring only once and leaking five goals in the process. Moreover, the visitors have no win in their last four games and only once victory in the last five. They leaked 8 goals and scored only 4 times during that time. It will be difficult to overturn a 3-0 goal deficit from the first leg in this trip, so we don’t expect much from BATE after successive two defeats ahead of the game.

The tables below contain the best UK sportsbooks with the highest odds for the Europa Conference League qualifiers as well as current team stats. 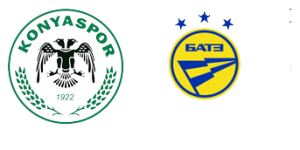 Who will host the duel?

Konyaspor will host the game at Konya Buyuksehir Belediyesi Stadium in Konya, Turkey.

Konyaspor vs BATE is scheduled for Thursday 28th July 2022.