Two of the bottom three sides in the Veikkausliiga meet on Monday when KTP host Mariehamn. Read our detailed predictions and find the best odds for the game below in our match preview.

Both KTP and Mariehamn are on lengthy runs with a victory ahead of their basement battle on Monday evening. Here are our top three free predictions for Monday’s Veikkausliiga contest.

Both newly promoted KTP and perennial strugglers Mariehamn have struggled in the early weeks of the new Veikkausliiga season, recording just one and two wins in ten games respectively so far. Both relegation candidates are on lengthy streaks without a victory, with zero wins in seven games for KTP and none in eight assignments for Mariehamn, and with self-belief lacking in both camps, a share of the spoils looks the likeliest outcome on Monday.

Mariehamn have scored a pitiful five goals in ten Veikkausliiga fixtures this season – a haul that makes them the division’s lowest scorers. Incredibly, The Islanders haven’t found the net for eight straight games, while KTP haven’t fared much better, netting just three times in their last six outings. With cutting edge lacking on both sides, we’re tipping under 2.5 goals to be registered at the Arto Tolsa Areena.

Lukas Syberyjski’s Mariehamn have been alarmingly abject in the final third and The Islanders’ run of eight straight games without scoring is as bad as it gets in attacking terms. In contrast, KTP have managed to score in three of their last four matches despite their failure to secure a victory and that slightly better output makes them worth considering at +1 in the match handicap stakes.

Veikkausliiga new boys KTP were tipped by many to return to the second tier at the first time of asking this season and their performances thus far have done little to shake those opinions. Argo Arbeiter’s men are just one place off the foot of the table after ten rounds of fixtures and their return of just one win during the same period is well below the standard required to stay afloat.

Mariehamn beat the drop by a whisker last season and their early displays in 2021 strongly suggest that another season-long battle to keep their necks above water is in the offing. Mariehamn have toiled badly in the final third, registering just five goals in ten appearances so far and their inability to create and finish chances at the business end makes them prime relegation candidates.

Top Betting Odds and Stats for KTP vs Mariehamn 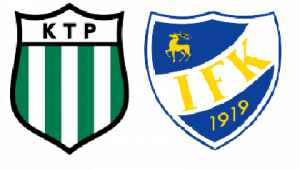 Monday’s fixture will be played at the Arto Tolsa Areena in Kotka.

Who is favourite to win Monday’s game?

Mariehamn haven’t scored for eight matches in a row and the bookmakers’ have priced KTP as favourites to win as a result.