KuPS will be determined to retain their first place when they host HIFK in the upcoming fixture of Veikkausliiga on Sunday, 24 July. Both teams enter the field after drawing their last game in different competitions.

KuPS are unbeaten in the last seven games of various tournaments and won four of them. The Canaries are also doing impressive at their home stadium by confirming an undefeated streak of 12 games, winning ten of them. On the other hand, HIFK are winless in the last three attempts and lost two in that duration. KuPS are also yet to lose against the star Chested and won three in the last five H2Hs. Therefore, we believe to see the Canaries adding three more points through this game.

The recent H2Hs of these teams have a trend of low-scoring outcomes but HIFK has changed to show a positive flow of goals at the latest away outings, scoring 12 in the last five. KuPS have also scored at least twice in three of the previous five attempts, scoring nine in total. So we predict this game to go over 2.5 goals.

KuPS have scored at least twice in all of the last four games at home and missed the target only once in the last 12 hosting games. On the contrary, HIFK has also shown a lengthy string of scoring by getting on the score sheet in all of the latest away outings. Three of the previous five H2Hs between these teams at the home of the Canaries also featured BTTS outcomes. Given the current stats, we will be expecting both teams to score at the same time once again this time.

The Yellow-Blacks come back to Veikkausliiga after drawing the first leg of Europa Conference League Qualifiers in a 2-2 result against Milsami. With 10 wins out of 14 outings, KuPS lead the points table with 33 points. Paulo Ricardo and Joona Veteli will not be able to enter this game due to medical concerns.

After the consecutive two defeats in the Finnish league, the Red Chested managed a draw in the last game with a score of 1-1 against Mariehamn. HIFk have secured only one victory after playing 14 league duels and are buried at the last of the table. All of the players will be ready for the selection of the upcoming game.

Top Betting Odds and Stats for KuPS vs HIFK

FAQs regarding KuPS vs HIFK Coverage and Accessibility 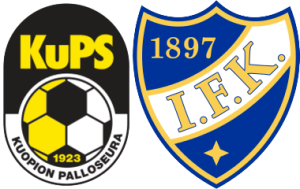 Where is the game being played? Vare Areena (Kuopio).