Both Teams To Score - Yes

This is a betting preview of the UEFA Conference League qualifiers, the second leg of the Osijek vs Kyzyl-Zhar duel. So, check our preview to get some free betting tips for this game.

If you are not sure what is the best bet for the Osijek vs Kyzyl-Zhar duel, check our favourite betting picks for the match right here:

Osijek to Win at Half Time and Full Time

The Croatian side managed to get a great result from the first match, winning that game . This gives them a big advantage ahead of the second leg, but we don't see them stopping here.

In fact, we can see Osijek fighting hard to secure the next stage of the Qualifiers, which is why we expect them to lead at half time and win at the end. After all, they are the better side on paper and they are playing at home.

The first leg between these two teams was an exciting one, especially the second half in which we saw three goals being scored. With that in mind, we can see this game going over 2.5 total goals as well.

After all, Osijek has gone over 2.5 total goals in three of their last five games in all competitions, although this only happened in two of the previous five matches played by Kyzyl-Zhar.

After all, both teams have scored in the last three games played by Osijek across the board, while the same thing happened in three of the last five Kyzyl-Zhar matches in all competitions.

NK Osijek have been a regular in various stages of European games. After reaching the third round of the Conference League qualifiers last year, Osijek are looking to push for a group stage appearance this time around. Manager Nenad Bjelica witnessed a strong performance from the team in the 2021-22 campaign. There are no injury worries for Nenad Bjelica in the squad and the team can be happy with the first leg result.

The debut season in the UEFA Conference League is likely to provide Kyzyl-Zhar with plenty of opportunities and nervousness in the game, especially after a loss in the first leg. The Kazakhstan outfit had a very difficult domestic campaign with the team finishing 12th in the standings. Coach Ali Aliev comes into the role for his first managerial job of his career. The 41-year-old does not have to deal with any injury problems in the squad.

Top Betting Odds and Stats for Osijek vs Kyzyl-Zhar

The Most Common Questions for Osijek vs Kyzyl-Zhar game 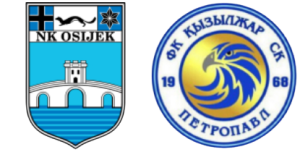 When is the game starting? The game is starting at 7:30 pm BST on Thursday, July 28th.