Larne To Win at Half Time

Larne will face St. Joseph's in a 2nd-leg fixture from the Europa Conference League qualifications on Thursday.

Surprisingly, the first match ended in a 0:0 draw and Larne still have to work to continue forward in the competition. Here are our predictions for this match.

Usually, when we have two teams that are on absolutely different levels and a low-scoring game as a 1st leg, the second match is brutal. We expect that Larne will score multiple goals in the second match and we know that they are a team that is able to. On the other end, St. Joseph's have a terrible defense and concede a goal or multiple goals in most of their domestic league games in Gibraltar – one of the weakest championships.

We think that Larne will not make the same mistakes and will try to score as early as possible in this match. They are the bigger team from the better championship and should be able to get past St Josephs without issues. Since the odds for the clean win are not worth a shot, we think that the Half Time win has great value. The option for Larne to score in both halves is another good alternative.

Although St Josephs have had loads of goal-packed games in Gibraltar lately, we do not think that they stand a chance against Larne and we do not even expect goals from them in this match. Larne have a much better defense and we have seen enough proof from their domestic league performances. We think that they will not concede a goal for the second time against this opponent.

Larne are a team from Northern Ireland and not one that usually participates in these international competitions. They are far from the best in the league but still a high-scoring team and a much bigger side than that of their opponents. They scored 61 goals in 38 fixtures in the last season. The squad is currently valued at 2.32 million euros.

St. Joseph's are a small team obviously and come from Gibraltar – a small country with one of the weakest leagues not only in Europe but the world. Nobody has any expectations for the team that has been valued at 1.20 million euros. They barely reach the top positions in the domestic league, what's left for an european competition.

Top Betting Odds and Stats for Larne vs St Joseph's

FAQs regarding Larne vs St Joseph's 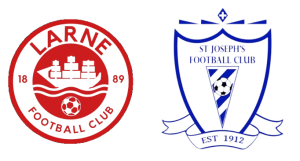 In which places did these two teams finish their domestic seasons?

Larne had a bad season but still managed to win their Europa Conference League qualifiers and are not participating in the real deal. The team ended the season at 5th place. On the other end, St. Joseph's finished in 3rd place.

This fixture has been scheduled for the Inver Park Stadium in Larne.