Lecce and Brescia – two of the top teams in Serie B. With similar ambitions and a difference of just two points, this match is crucial for both sides as it will show us who deserves to be at the top of the league.

Lecce and Brescia have been almost mistakeless this season if we count draws as positive results. The season is nearing its end now, so all the remaining points have the same significance for each team in the promotion race.

When it comes to goals, Lecce and Brescia are two of the top-scoring teams in Serie B and it is always surprising not to see them score in a game. It happens rarely, in each case. Between them, most of the games have always had loads of goals – for instance, eight of the last 10 had more than 2.5 goals. You can consider that market as an alternative but we all know that BTTS is more common than over 2.5 in Serie B. Moreover, eight of the last ten games of Lecce had both teams scoring. On the other side, Brescia had the same result in four out of five recent games. Overall, we expect a difficult match with goals from both sides and an unexpected outcome as both teams have equal chances.

There is no other way to play this match than a draw. See these two teams and you will understand. Lecce are the strongest host in the league. The team has lost just a single game out of 14 and has won 9 to date. Their performances have been extraordinary. On the other side, however, we have the strongest away team in the league – Brescia. The visitors have been far better than all other teams on the road and lost just 2 out of 14 fixtures to date. You see how we have the best at home against the best on the road. The last two fixtures between these two teams ended in draws and we expect to see the same here.

The stats of both teams in recent weeks are quite the opposite but combined, we feel like this is the perfect line for this game. We expect to see a lot of corners and mainly action in attack from both sides. For example, here are Lecce's stats from their last five home games – the impressive 6.60 corners per game on average. On the other side, Brescia have also been impressive in away games – 6.40 corners per game in their last five outings. As you can see, when combined, the corners go away above our line and we expect to see many here.

Top Betting Odds and Stats for Lecce vs Brescia

FAQs regarding Lecce vs Brescia 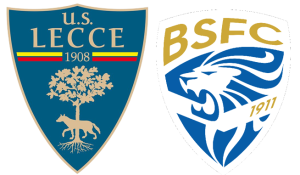 In which places are Lecce and Brescia?

Lecce and Brescia are fighting for the same thing – not just promotion but the championship itself. Currently, Lecce are at the top of the league where they have been for a few weeks. Brescia are right below them at 4th place with 51 points, two less than the hosts.

This match will take place at Lecce's home ground – Stadio Via del Mare.