Once again, Leyton Orient proved that they are a team that is capable of the most unexpected turnarounds. Now, they will face Barrow in an important match from the bottom half of the table.

Leyton Orient had over 15 games without a win and suddenly, they started dominating their opponents. What will happen against Barrow, another one of the weakest teams in the league?

We are going against the expectations here with two teams that are on about the same level but have been having completely different recent performances. Barrow are one of the three lowest-scoring sides in the league and their performances on the road have been terrible. Leyton have generally had a strong defense this season and have conceded only 38 goals in 37 fixtures. Even in their worst recent run, they weren't conceding goals.

As explained above, Leyton Orient have once again turned into a completely different team after months without a win. They managed to win their two latest games with 3:1 and 0:3, which was surprising even against these weaker opponents. Against Barrow, we expect another good result as it seems like Leyton have really found the chemistry and the right formula for success.

Leyton Orient are one of the teams that take the fewest corners in League Two and most of their games have far less than 10-11. Overall, they have taken just 3.20 corners in their last five games in the league. It is true that Barrow took more with their 5.20 per game but we still expect a low number here.

Leyton Orient should obviously not be in the bottom half of the table but they have been struggling with bad form and injuries. It appears like this is now in the past and they are back in good form. They have almost nothing to play for at this point as there is no chance to reach the play-off zone but we expect some good results until the end to make up for that terrible winless streak.

Barrow have also been struggling for the better part of the season and they remain near the bottom. They are fortunate that all teams below them are in terrible forms, so more or less, they have been saved from relegation. They need to improve their attack as it has been one of the most ineffective ones in the league.

Top Betting Odds and Stats for Leyton Orient vs Barrow

FAQs regarding Leyton Orient vs Barrow 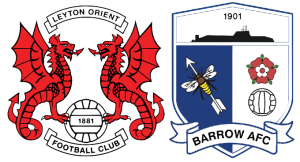 In which places are Leyton Orient and Barrow?

Both sides are in the bottom half of the table and not too far from each other in terms of points. Leyton Orient are 17th with 43 points while Barrow have 37 points at 21st place.