Leyton Orient welcome Crawley to The Breyer Group Stadium on Saturday. Two clubs from opposite ends of the League Two table meet in London. Read our free predictions and find the latest odds for the fixture below in our detailed match preview.

Leyton Orient are aiming to strengthen their bid for a playoff place when they take on Crawley. Read our top three predictions for this weekend’s fixture below.

Leyton Orient scored four goals for the second home game in a row on Tuesday evening when they hammered Swindon 4-1, sending a warning shot to the rest of the division with their demolition job on the away day specialists in the process. Crawley meanwhile, have lost five of their nine League Two away assignments this term and they could find it tough to match Orient’s confidence and class on Saturday.

Struggling Crawley have found it difficult to string positive results together this season, though they have at least been reliable goalscorers. Town have notched at least once in 13 of their last 14 matches in the fourth tier and their knack for getting in on the act should allow them to net a consolation at The Breyer Group Stadium this weekend. With that considered, bettors are advised to back both teams to score.

Leyton Orient attacker Aaron Drinan has been in electric form of late and the 23-year-old looks a solid bet in the anytime scorer market this weekend as a result. With a stunning ten goals in his last eight runouts for his club, Drinan has looked razor-sharp in the final third, and we expect more heroics from the Irishman on Saturday.

Midfielders Craig Clay and Callum Reilly are both expected to sit out Saturday's game for Leyton Orient, though manager Kenny Jackett has a strong pool of players to pick from elsewhere. Orient climbed back into the playoff places with their superb win over Swindon on Tuesday and another positive set of results this weekend could fire them up to fourth position.

Will Ferry could be absent again this weekend for Crawley, while Jordan Tunnicliffe is listed as doubtful. Town claimed a share of the spoils in a 1-1 draw at Walsall on Tuesday, though they have won only once in their last ten fixtures in all competitions overall. Nevertheless, a win on Saturday would catapult the Reds back into midtable safety.

Top Betting Odds and Stats for Leyton Orient vs Crawley 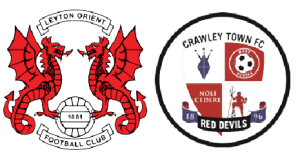 Leyton Orient have been priced as favourites to beat Crawley on Saturday.

Leyton Orient thumped Crawley 4-0 when the teams last met for an EFL Trophy clash on October 5.