Leyton Orient and Exeter City go in search of their first league win of the season when they play at the Breyer Group Stadium in London this weekend.

Leyton Orient were pegged back by a 1-1 score against Salford City during the weekend. In the midweek League Cup action, Leyton Orient were knocked out on penalties by QPR. Exeter City began the new season with a goalless draw against Bradford followed by a penalty shootout exit from the League Cup at the hands of Wycombe Wanderers.

Stalemate between the two teams

Leyton Orient and Exeter City were pretty disappointing going forward in the opening match. The two teams lack threat up front and it is likely to result in a dull encounter. Exeter have had the upper hand over Leyton Orient with no defeats in the last six meetings. However, the visitors may have to settle for a point this time around.

This has been a fixture that has produced a lot of goals in the past with Exeter alone grabbing 15 goals in the last six outings against Leyton Orient. However, there is a not a great deal of creativity for both teams coming into the game. Leyton Orient may stick with the direct approach which is favoured by manager Kenny Jackett.

This game is likely to produce a low number of goals going by the form shown by the two teams in the early rounds of the season. Leyton Orient have scored a goal in each of their two competitive matches so far, while Exeter have not been to get at least a goal.

After a respectable 11th place finish in the league last season, Leyton Orient are trying to make a push into the top half. It would be their best ever finish in recent years, as Leyton Orient have largely struggled at the foot of the top tiers of English football. Kenny Jackett does not have any injury problems in this match.

Exeter boss Mike Taylor has to work heavily on the opportunities that have been created in the final third by his team. After failing to score in the opening two rounds of the season, Exeter might have to reinvest some of the funds received from the sell-on clause of Ollie Watkins’ transfer to Aston Villa. There are no injuries for Exeter ahead of this game. 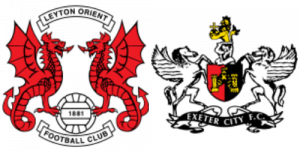 This League Two game will take place at the Breyer Group Stadium.

The favourite team to win this match would be Leyton Orient.