Leyton Orient will host Rochdale in a match from the bottom half of the table in League Two.

We would normally bet for an under in this fixture but we expect to see goals from both sides here. The first game between Leyton Orient and Rochdale this season ended in a 2:2 draw. At this point, these two teams have almost nothing to play for and we generally expect open play with a bunch of goals. Leyton Orient have been having quite a few goal-packed games lately.

Both sides are on their own streaks of draws and we expect to see one more here after their previous 2:2 tie in November. Leyton Orient have not won in 16 consecutive games and even Rochdale might be a difficult challenge. At least, they have not been losing either and have four consecutive draws. Rochdale are also winless in four games and their last two ended in draws.

Leyton Orient have been the weakest team in the league in a while – even weaker than Oldham and Scunthorpe. They have not had a win in 16 consecutive games, which is just terrible. Even an opponent like Rochdale is a difficult challenge although Leyton generally started scoring goals in recent games.

Rochdale had a few positive results last month but March has not been a good month for them. They have failed to win against some of the other weakest teams in the league and generally do not score a lot of goals.

Top Betting Odds and Stats for Leyton Orient vs Rochdale

FAQs regarding Leyton Orient vs Rochdale 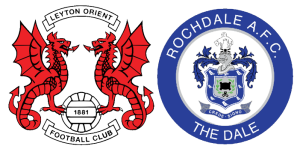 In which places are Leyton Orient and Rochdale?

Both teams are in the bottom half of the table but quite safe from relegation at this point. Leyton Orient are 20th with 37 points while Rochdale are 17th with 40 points.