One of the improved teams from the middle of the table faces one of the teams at the worst possible form – Leyton Orient vs Salford.

Something happened at Leyton Orient. The team was looking great at one point and a real contender and then suddenly, 8 consecutive games without a win. How will they do against Salford, who have been looking better than usual?

If there is a team that you do not want to bet on currently, that is Leyton Orient. There are certain weak teams that you just know may score but Leyton, it seems almost impossible. They scored just two goals in their last eight games, 6 of which were losses. Salford have also turned into a team that does not concede almost any goals and they conceded only 7 in their last 10 games, which happened in 4/10 games actually. It will be a complete surprise to see both teams score in this fixture, which actually happened in the previous head-to-head, which ended in 1:1. Back then, however, we had two completely different teams.

For some unexplained reason, Salford are huge underdogs in this fixture. The last time Leyton Orient won at home was in early December. The team scored in 2/8 latest games and they did not show anything in their recent games overall. Salford, however, have been winning games on the road and actually – 4 out of their last 10 outings. These include good surprising wins against teams like Port Vale and Newport. We think they should be the big favorite here, so the odds for their win appear like a real present. If you prefer safer picks, go for the draw no bet option which is also at high odds or the double chance alternative at lower odds.

Leyton Orient and Salford are the perfect combination in a matchup with few corners. Neither side has been good in this aspect of the game and we expect less than 9 corners overall. For instance, the hosts took an average of 3.89 corners in their games to date. At the same time, 4.14 were taken in their home games alone. Salford, however, have a slightly better all-season stat and a much worse stat on the road – 4.50 on average this season and just 3.87 in away games.

Top Betting Odds and Stats for Leyton Orient vs Salford

FAQs regarding Leyton Orient vs Salford 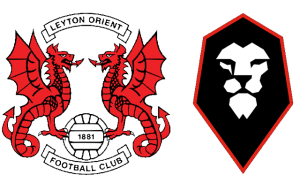 • In which places are Leyton Orient and Salford?

Salford still have a chance to reach the promotion group but they played more games already than most teams and unless they start winning over and over, these chances will fade. They are 10th currently with 41 points. Leyton Orient's recent run put them back to 16th place and they have 33 points.

This fixture will be played at Leyton Orient's home ground in London – the Brisbane Road Stadium, which has a capacity for 9,271 spectators.

• When does the match between Leyton Orient and Salford begin?