Sunderland makes the trip to Lincoln for their first game of the EFL Trophy on Tuesday, October 5. City enters this fixture with a draw to look back upon, while the Black Cats will be looking to return to their winning track after losing their last competitive encounter.

Sunderland suffered their first defeat in their last match, bringing an end to their nine games unbeaten streak, seven of which were victories. Meanwhile Lincoln have won just one duel in the last five games. Lincoln will be wanting to press for home advantage against the Lads but the past H2H’s results don’t seem helpful for this match. The Imps jotted down only one victory in the last six matches against Sunderland. Hence, our favourites for this match will be the guests to repeat the last H2H result where they won by a 2-1 lead.

Lincoln has registered only four goals in the last five matches they played, but in this case, Sunderland stands on the other end of the spectrum. The Lads have shown impressive numbers on its side recently by hitting back of the net 10 times in the last five matches. Moreover, the last clash between the teams ended with a total of three goals. So we expect this match to cross the total of 2.5 goals after the final whistle.

With the exception of their last match, Sunderland’s defence has been a tough challenge recently for their rivals that managed to claim three clean sheets in the last five matches. But Lincoln will be confident to score in this game following the ability to score consistently in the last four meetings against Sunderland. In addition, three of the last five matches these teams played against each other gave the BTTS outcome. So we believe this fixture to repeat the same pattern with The Black Cats taking a 1-2 lead.

Lincoln are sixteenth on the League One table but managed to draw their last game against the owners of the third position, Plymouth Argyle. However, it has to be agreed that the Imps are not having a good time despite managing to win both games of group stages of the EFL Trophy. They will want to continue this run as manager Michael Appleton will have a completely healthy squad ahead of this match

The Black Cats lost the first position after getting an awful result in their last match where they lost to Portsmouth 4-0. But the team has overall satisfying results with seven wins and one draw in League One so far. Arbenit Xhemajli and Jordan Willis will not be available for manager Lee Jhonsan for their coming EFL Trophy engagement.

Top Betting Odds and Stats for Lincoln vs Sunderland

FAQs regarding Lincoln vs Sunderland Coverage and Accessibility 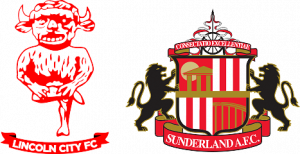 What is the Head to Head record?

Lincoln has won twice, while Sunderland has claimed bragging rights on four occasions, with two stalemates in their eight meetings.