Browse through our prediction carefully as we believe this clash has amazing opportunities and odds for the betting man.

Shandong Taishan has been the punching bag in Group F of the AFC Champions League this season and we don’t believe the team has what it takes to compete against this superior Lion City Sailors’ side.

Home Victory In Both Halves

The two teams have played a total of three games over the years. The last game between them ended in a goalless draw but the remaining two both ended with Shandong Taishan victories. The truth is that those games were played 22 years ago and can hardly be a valid reason for us to consider Shandong Taishan as a favorite for this clash. Lion City Sailors’ should be angry at how things ended in the first leg a few weeks ago as the team was by far the superior side – 19 total shots against Shandong Taishan’s three.

Lion City should have no trouble defeating Shandong Taishan on Sunday but the question is by how much? We believe that it will be a low goal-scoring game with Lion City producing most of the action. The team had 19 shots in the first game in China and the odds for goals from Lion City Sailors look good.

Shandong Taishan didn’t perform well at all in the first game and disappointed the few fans on the stands that could make it for this game. The home side had only three shots at target of which both three were inaccurate so Izwan Mahbud didn’t have much work to do saving his net from the ball.

Some interesting facts about the two teams are located below.

Lion City Sailors’ performance in the AFC Champions League has been very balanced. The team has one victory, one draw, and one loss in the first three games. The 3rd position in Group F gives the fans hope that if everything goes well, qualification for the next rounds shouldn’t be too much of an issue.

Shandong Taishan actually doesn’t have a single goal in the AFC Champions League. The team’s 0:12 record is an absolute hit for the fans. All hopes for qualification for the next round will go down the draw in the Lion City Sailors’ visit on Sunday. 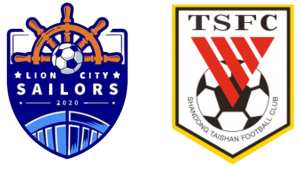