Lion City face Urawa Reds in another match from the first round in the AFC Champions League.

This is the first time in the tournament for Lion City and the expectations are not high especially against a team like Urawa Reds.

Lion City will debut in the AFC in front of their own crowd and while Urawa Reds have had a difficult time at the start of this season, we do not see how the hosts will beat them or perhaps even score. Lion City are levels above all other teams in Singapore but that league is then levels below the Japanese elite and we think that Urawa Reds will not concede here.

The odds are not yet available for the first round in the AFC Champions League as we are writing this preview but we know that Urawa Reds will be the big favorite here. We trust them with the win here as they are levels above their opponents even in their bad form right now in the Japanese league. This is a great opportunity for the team to return to the winning path.

We usually prefer to go for corner lines as a third prediction but the odds are not yet available and we do not have a certainty that there will be corner markets for the AFC yet. For this reason, we pick the under 2.5 option because we have a team that is good domestically but in a weak league and Urawa Reds, who are not a high-scoring team in Japan and will look for an easy win without conceding a goal.

Lion City started the season in an extremely good way and look like they are already on their way to another championship. The team played seven games to date and scored 16 goals while allowing only four in their net. We cannot speak about big player names in their squad, so we can say that they are a significantly weaker team.

Urawa Reds have not been in the AFC Champions League since 2019 and will be motivated to succeed in one of the easier groups of the tournament. When compared, Urawa's squad has been valued at over 20 million euros while Lion City's team has been valued at approximately 6 million. There is a massive difference in class and Urawa Reds should have an easy task theoretically. 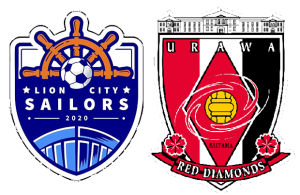 In which places are Lion City and Urawa Reds in their domestic leagues?

After seven rounds in the Singaporean Premier League, Lion City Sailors are 1st in the table with 5 wins out of 7 games. On the other side, Urawa Reds are 10th in the J League after 10 rounds.

This match will take place at the Chang Arena in Buriram.