Bottom club Longford go in search of crucial Premier Division points when Derry City visit Bishopsgate Stadium. Read our expert predictions and find the best odds for the game below in our detailed match preview.

Longford Town are on a 20-match winless run in the league ahead of Saturday’s tussle with Derry City. Read our top three expert predictions for this weekend's fixture below.

Irish Premier Division bottom club Longford Town are comfortably the worst team in the league and they have failed to win any of their 20 matches since their surprise opening weekend triumph over Saturday’s opponents Derry back in March. City meanwhile, have gone on to become one of the competition’s away specialists since and they have won five of their last eight matches on the road. Expect the Candystripes to add to their impressive away points haul this weekend.

While Longford’s results have been overwhelmingly miserable, Town have at least carried a consistent goal-scoring threat. They have found the net at least once in seven of their last eight games, while BTTS has landed in three of their last four league assignments at Bishopsgate Stadium. Derry meanwhile, have traded blows with their hosts in five of their last seven away games and we’re tipping both teams to notch again this weekend with those records in mind.

Despite posting some excellent results, Derry are far from prolific on the road, where they are averaging just 1.0 goals per 90 minutes. It is worth noting however, that three of their last four victories away from the Brandywell finished 2-1 in their favour and another two-goal showing at Longford this weekend should get Ruaidhrí Higgins’s men over the line.

Rock bottom and already odds on to return to the second tier, Longford have gone a whopping 20 Premier Division matches without a victory. Town did restore some positivity with a meaty cup win over Bangor last time out, but don’t let that 5-0 triumph over the non-league outfit fool you. Longford are already eight points adrift of safety and they don’t look like clawing their way back into survival contention.

Derry City are stuck in mid-table limbo as we enter the second half of the season in Ireland and in stark contrast to their excellent away displays, the Candystripes just cannot seem to find a winning formula at home. City have bagged 64% of their total points this term in fixtures away from the Brandywell, while a huge 83% of their victories for the campaign so far have also come on the road. 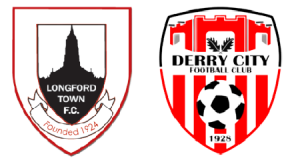 Saturday’s game will be played at the Bishopsgate Stadium.

The bookmakers have made away day specialists Derry City their favourites to win this weekend.