Netanya Stadium faithful will watch their home side clash with the current league pacesetters on 30/01/2022. Will Netanya marshal enough fire-power to stop the high-flying Maccabi Haifa’ striking duo? Let’s walk you through our top picks for this Sunday clash.

The hosts are one point shy of the European championship qualifiers positions. The Diamonds have become tougher to beat in this half of the season irrespective of the venue. Here are our top picks for the coming event:

There were over 1.5 goals in the last nine games between ten Maccabi Netanya vs Maccabi Haifa encounters. Haifa won eight of those clashes coming into this game. We expect the visitors to have enough arsenals to continue their dominance over this opposition. This conviction comes from the fact that the Green Apes have won all their five away games with two or more goals. Besides, the hosts conceded on three occasions from their previous five games.

Maccabi Haifa registered over 2.5 goals in each of its last encounters away from home. They scored an average of 3.6 goals in their previous five away games. The hosts only failed to score once from their last five games. We expect the hosts to get on the scoresheet in this clash. However, we expect the visitors’ current winning streak to continue. The implication is more than two goals to be recorded in this clash.

Maccabi Haifa has dominated this fixture with eight wins to one against the Diamonds. The hosts are happy because they will meet the Green Apes while enjoying a fantastic run of form at home. Netanya lost a single home game in the league from the last five encounters.

Maccabi Netanya predicted lineups: Ron Ashkenazi, Omar Gaye, and Partait will remain in the recuperating room when the Diamonds host the Green Apes on 30/01/2022.

Maccabi Haifa predicted lineups: Abo Fani will miss this clash because he picked up a red card in the last match against Hapoel Jerusalem. However, Bakhar has enough pool to draw more arsenals to face the stubborn Diamonds. 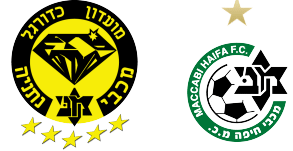 Which team has dominated the Maccabi Netanya vsMaccabi Haifa encounter?

Maccabi Haifa has won eight of the last ten encounters against Netanya.

What will be the venue for the coming encounter between Maccabi Netanya andMaccabi Haifa?

The match will take place at Netanya Stadium.

Who is the current Maccabi Haifa's top goalscorer?

Omer Atzil is the current Haifa’s top scorer on 12 goals.