In this National League fixture, Maidenhead hosts Boreham Wood at York Road. The Wood are one of the title contenders this season while the Magpies are desperate to avoid relegation.

After forcing a patch of four matches unbeaten, Maidenhead has returned to their old ways. They are winless in their last three matches and this run will surely stretch to four as they host Boreham Wood. The Wood has been spectacular this season and has registered four away wins in succession. The last two iterations of this fixture also finished in their favour and we expect the trend to continue on February 19.

Maidenhead has been involved in 15 goals over their last five home fixtures, scoring seven whilst conceding on eight occasions. Boreham have continued their conservative approach on the road, scoring six times while having the ball picked out of their net three times. With the Wood being the more dominant outfit, we expect them to force the issue and earn the three points on offer without complicating matters a lot.

While the Magpies have found scoring easy of late, even then they have been shut out by Stockport Couty and Barnet. Boreham will surely like to add to this tally. The Wood has kept three clean sheets in their last four away fixtures and will have a backline prepped to add to this tally. Scorers at York Road will not have much action in this late National League fixture as both teams are unlikely to get on the scoreboard.

Despite playing three matches fewer than their rivals, a midtable position looks unlikely for Maidenhead United. The Magpies have struggled for form this season and sit outside the relegation zone. They have a six-point cushion to their advantage and need to address their results if they are to claim another midtable position this season. It is not that they are scoring enough goals but the fact that they are not stopping their rivals that has hurt their cause.

Alan Devonshire will be asking his Maidenhead charges to look at the tremendous gains made by Boreham Wood this season. The Wood finished below the Magpies last season but are locked in a title battle with Stockport County and Chesterfield this season. While their rivals have managed their league standing with exuberant offensive displays, they have forged their path with defensive solidity that is peerless in the National League.

Top Betting Odds and Stats for Maidenhead vs Boreham Wood

FAQs regarding Maidenhead vs Boreham Wood Coverage and Accessibility 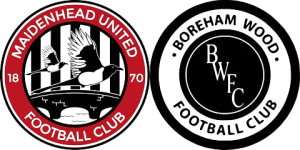 Where is the game being played? York Road.