The English National League continues with an important fixture between Maidenhead and Chesterfield. Two teams from the completely opposite sides of the table meet in a match that is crucial for both sides but for different reasons.

Chesterfield might be a point short from the top of the table at this point but they have been the team at the best form in the league for months. Their opponents managed to get a couple of positive results in their most recent games but Chesterfield.

As we have one of the weakest against one of the top teams in the league, the favorite here is obvious and anything but a win for Chesterfield would be a surprise. Maidenhead have recently had a couple of positive results including an unexpected win against Bromley, one of the other contenders for promotion.

Yet, Chesterfield have proven that they are on a different level and they have the best goal difference in the league. The team has conceded the second-fewest goals in the entire league and just 7 in 11 outings. Maidenhead can score goals and they did have several impressive performances but those weren't against the stronger teams, so we do not expect them to score in this fixture.

As mentioned above, Chesterfield are levels above Maidenhead and they have been throughout the entire season. The team recorded just 1 loss in 21 games and we do not expect them to lose here either. Maidenhead won 4 out of 10 home games and only one of those games was against a top team. Chesterfield's away performance throughout the season puts them second in points – 7 wins, 3 draws, 1 loss. They haven't lost a league game since September.

Chesterfield are one of the top-scoring team in the National League and also have the best goal-difference in away games. The team has netted 21 goals in 11 outings which is almost an average of 2 goals scored per match. Maidenhead conceded more than 2 goals in 7/10 home games this season while Chesterfield scored more than twice in 7/11 games.

The teams haven't played yet this season, so we have no recent data on the way they performed against each other but based on their form, we expect to see at least 2 goals from the visitors.

Top Betting Odds and Stats for Maidenhead vs Chesterfield

FAQs regarding Maidenhead vs Chesterfield 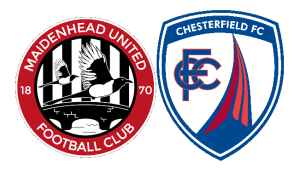 • In which places are Maidenhead and Chesterfield?

Maidenhead are fighting for their place in the league. The team has been right above the relegation zone for months now and is currently sitting at 20th place with 19 points. Chesterfield, in turn, are right below the current leaders in the standings. The team is 2nd with 46 points after 21 games.

Chesterfield rank second in the league when it comes to goals scored. The team has netted 42 times in 21 games. On the other side, Maidenhead are among the lowest-scoring sides in the league. Tuesday's hosts have scored just 21 goals in 20 games.

This fixture has been scheduled for 19:45 UTC on Tuesday, January 18.