Maidenhead will host Notts County in their final fixture of the 2021/22 season in the National League.

Both teams know their final positions and this match has absolutely no significant meaning for either side.

Despite their absolutely opposite statistics this season, both sides have been having incredibly goal-packed games lately and we expect to see goals from both sides. Maidenhead have surprisingly been scoring goals in almost all of their fixtures and more than 1-2 goals on multiple recent occasions. Notts County have a solid defense but they will probably not be 100% in to keep a clean sheet in this final match.

Obviously, Notts County are the much better team in this fixture but they have nothing to play for. They have secured that quarter-final position and even if they lose, they will not lose their spot. We do not expect them to come out with their full squad and even if they do, we do not expect the same efforts. They recently lost a bunch of games on the road against weaker teams than Maidenhead too. At the same time, the hosts lost only 2 games at home in their last 10 home games.

As we expect the both teams to score market to win, we think that the over 2.5 has a lot of value too. Maidenhead have been incredible lately, at their best form of this campaign. They scored more than 2 goals on multiple occassions and even against top teams too. Maidenhead have also been shockingly successful and scored three goals in 4 out of their last 8 games in the league. There hasn't been a single game in their last 10 in which they failed to score a goal.

Maidenhead have had a disappointing season and it truly is because this is a team with a huge potential. We saw it in their last couple of months – their level is much higher than what they showed this campaign and we expect a much better season next year. After 43 games, the team has a goal difference of 48:66, so as long as they improve that defense, we expect them to be a contender next year.

Notts County have been a serious contender throughout the entire campaign but only managed to seal that playoff spot in the last couple of weeks. They are one of the four highest-scroring teams in the entire league with 80 goals in 43 fixtures. The team's recent form suggests that we might see them succeed in the playoffs when compared to that of other qualified teams.

Top Betting Odds and Stats for Maidenhead vs Notts County

FAQs regarding Maidenhead vs Notts County 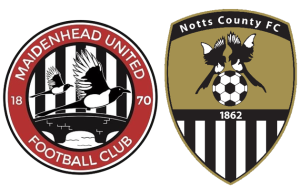 In which places are Maidenhead and Notts County?

These two teams will finish the season on the opposite ends of the table. Right now, Maidenhead are 16th in the league with 51 points while Notts County are 5th with 79 points.

This fixture has been scheduled for Maidenhead's home ground – York Road.