Round 20 of the English League Two presents us with an incredible opportunity – a match between one of the league's most improved teams against Carlisle, which have turned out to be one of the weakest sides.

Mansfield had a really disappointing start to the season but the past month has been incredible for them – statistically, they are among the three teams in the best form and Carlisle seem like the perfect opportunity to continue that winning streak. This match presents us with unique opportunities for winning bets in quite a few different markets. Which are the best betting options for Mansfield vs Carlisle?

Mansfield have been incredible lately but they still have problems in defense – the sole reason for their incredible results has been their strong offense. Carlisle have been having certain issues in attack but they will get more than enough chances to score on Tuesday and we expect them to succeed. As for Mansfield, there is no doubt that the team will score – they have done so in 9/10 recent games in all tournaments and in most cases, they scored more than 1 goal.

Mansfield are far from being one of the strongest home teams in the league but their recent performances have shown that they are among the best current teams overall. Carlisle, on the other hand, are one of the weakest away teams with just 1 win in 9 rounds. They are among the three teams that have conceded the highest number of goals in away games. We expect Mansfield to continue with their outstanding performance – they have won 7/10 of their most recent games in all tournaments.

Let's take a look at Mansfield's goal-scoring results as of the last couple of months. We mentioned that they won 7/10 games in all tournaments but for this particular bet, it is important to note that Mansfield scored at least 2 goals in 6/10 games. They scored at least once in 9/10. Carlisle, in turn, have conceded more than 2 goals in 7/9 away games this season. There is no doubt that Mansfield will control the pace of this match and we expect Carlisle to fail once again in defense.

Top Betting Odds and Stats for Mansfield vs Carlisle

FAQs regarding Mansfield vs Carlisle 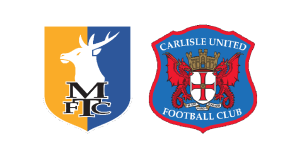 • In which places are Mansfield and Carlisle currently?

Before the start of their incredible winning run, Mansfield were near the bottom of the standings. The team has since almost reached the middle of the table – 15th with 23 points. Carlisle, on the other hand, are right above the relegation zone at 22nd place with 16 points.

• When will the match be played?

This fixture has been scheduled for 19:45 UTC on Tuesday, December 7.

This match will be played at Mansfield's home ground – the Field Mill stadium, which has a capacity for 9,186 spectators.