Mansfield and Forest Green will play their most important fixture of this season in the final round of the campaign.

Forest Green lost the lead position in the league and now have one more chance to win the league as long as they win their game and Exeter lose theirs.

We are going against the obvious, which is to expect goals from both teams in this final match. However, Mansfield's home form has been unbelievable for months. On the other side, Forest Green have been in terrible form and they have not won a lot of games lately. In fact, they had a bunch of games where they did not score a single goal either.

The match is equally important for both teams here. Mansfield still need the three points to secure their direct promotion while Forest Green are fighting for the actual championship. Nevertheless, Forest Green won only two of their last 10 games on the road and just one of their last five games overall, which was at home. They lost against Swindon and Harrogate in the last two rounds too. We think that Mansfield's home form is too strong for the current Forest Green.

Mansfield deserve that direct promotion. The team had a terrible start and then improved into one of the best teams in the league and that form has remained for more than half a season now. Their home performance especially is what sets them appart from most other sides and they lost only 2 of their last 10 home games, all other eight being wins. We think that they are a stronger team than Forest Green right now.

Forest Green were miles in front of all other teams in the league for about 3/4 of the season and then their form suddenly disappeared. At one point, they had almost 20 points between them and the 2nd in the standings. Now, one match before the end of the season, they are not even at the top of the table. They need to find their old form in this final fixture if they even plan to fight for that title after getting promoted already.

Top Betting Odds and Stats for Mansfield vs Forest Green

FAQs regarding Mansfield vs Forest Green 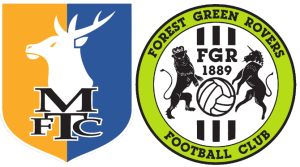 In which places are Mansfield and Forest Green?

Both sides will finish this season in the promotion zone – the question is in which places. Forest Green are now 2nd in the league with 83 points and one point below the leaders. On the other side, Mansfield are 5th right now with 76 points.

This match has been scheduled for Mansfield's home ground – One Call Stadium.