Mansfield and Hartlepool go head-to-head for three League Two points on Boxing Day. Mansfield are targeting their sixth victory in a row when they take on Pools. Read our free predictions and find the latest odds for the fixture below in our detailed match preview.

Hartlepool hold League Two’s worst away record this season ahead of their trip to take on in-form Mansfield. Read our top three predictions for this weekend’s fixture below.

Following a surge of five straight wins and ten victories in their last 11 matches in all competitions overall, Mansfield are riding the crest of a wave and the Stags should be able to continue their superb run against Hartlepool on Sunday. Pools are League Two’s worst performers on the road this term and having lost eight out ten away assignments so far, bettors can oppose them with confidence this weekend.

Only two clubs in League Two have conceded more often than Hartlepool in away games this season and Pools are shipping twice per game on average on their travels. Mansfield meanwhile, have notched at least two goals in three of their last four tussles and they have the firepower to punish their opponent’s leaky defence on Sunday. With that considered, we recommend backing the Stags in the over 1.5 team goals market.

Mansfield’s superb upturn in form has been complemented by an increase in their output in the final third, indeed, six of their last nine matches have produced over 2.5 goals. The Stags will be aiming to fill their boots again when a porous Hartlepool side come to town and goals and excitement should be high on the agenda again. As a consequence, backing over 2.5 goals to rattle the net again appeals at the prices on offer.

It’s hard to put a finger on why Nigel Clough’s Mansfield have taken off in such spectacular fashion in recent weeks, though their run of ten wins in 11 games in league and cup makes them one of English football’s most in-form outfits nonetheless. The Stags’ poor start to the campaign means they are still hovering in League Two’s midsection, though a six straight home victory against Hartlepool could move them to within touching distance of 7th spot.

Hartlepool’s clash with Colchester was called off for COVID related reasons last weekend and Pools could still have a number of players out with the illness this week. Hartlepool charges have won only one of their last seven assignments in League Two, though new manager Graeme Lee has only been around for the most recent two of those fixtures, where the club gathered four points from the six on offer.

Top Betting Odds and Stats for Mansfield vs Hartlepool 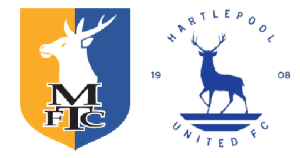 Neither club is expected to be in the running to lift the League Two title this term.

Mansfield have been priced as favourites to beat Hartlepool this weekend.