Mansfield and Leyton Orient face off at the One Call Stadium in League Two on Saturday. The Stags are favourites to maintain their winning streak at Orient’s expense. Read our free predictions and find the latest odds for the fixture below in our detailed match preview.

Red-hot Mansfield have won seven games on the bounce in League Two ahead of their meeting with Leyton Orient on Saturday. Read our top three predictions for this weekend’s fixture below.

With seven wins on the spin and ten victories in 11 assignments in League Two overall, Mansfield are in the midst of a scintillating streak and The Stags can keep the good results coming on Saturday. Leyton Orient have pocketed just one point in their last four matches and they look ill-equipped to halt Mansfield’s incredible surge this weekend. With that considered, we recommend siding with the hosts in the match result market.

Leyton Orient’s play in the final third has been blunt to say the least in recent weeks and Kenny Jackett’s toothless charges have failed to score in their last three matches in League Two. With the team’s forwards low on confidence and completely out of sync, Orient could struggle to impact the scoresheet again when they travel to take on red-hot Mansfield and bettors are advised to back both teams not to score as a consequence.

Mansfield have been playing some slick attacking football under Nigel Clough and the Stags have rattled the net at least twice in six of their last seven league fixtures. At the One Call Stadium, Mansfield have notched ten times in their last four runouts and they have enough in their armoury to carve Leyton Orient’s defence open on Saturday. With those factors acknowledged, backing the hosts in the over 1.5 team goals market could be a smart ploy.

Mansfield vs Leyton Orient Match Preview: Mansfield in the groove

Mansfield are riding the crest of a wave at present and their confidence was never more evident than in their 3-1 win at Barrow last time out – a victory that was secured despite the Stags having ten men for the entire second half. Farrend Rawson was the guilty party in the game and the defender will miss Saturday’s match through suspension. Another win for Mansfield this weekend could move them level on points with third-placed Newport.

An 85th-minute winner consigned Leyton Orient to a 1-0 reverse at home to Newport on Tuesday in a defeat where the hosts mustered just two attempts on target in another dismal showing in the final third. Orient were one of League Two’s most prolific teams in the campaign’s early exchanges, though the goals have dried up and Kenny Jackett will need star turn Harry Smith to find his shooting boots soon.

Top Betting Odds and Stats for Mansfield vs Leyton Orient 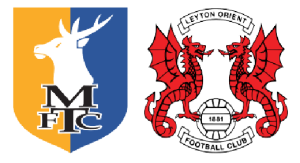 Mansfield and Leyton Orient drew 0-0 when they last met on September 25th.

Saturday’s game will be contested at the One Call Stadium.