Mansfield and Northampton will meet in one of the most important matches of this season – both teams are fighting for promotion and are separated by three points.

The promotion race this season has been unbelievable and with seven rounds left to play, there are 11 teams that are within range of the playoffs.

These are among the two best teams of course and both sides have the ability to score a lot of goals in a good game. We think that we will see both teams score here and we might potentially see a draw given the importance of this fixture. Three of the last five h2h games ended with both teams scoring. Northampton won the first match this season with 2:0 but that was when Mansfield were quite weaker than now.

Mansfield finished right within the borders of the promotion zone and will be looking towards another home win that will put them ahead for the semi-finals where they belong.Overall, Mansfield have an incredible home record and their performances have been unbelievable lately. They won eight out of their last 10 home games. While Northampton seem to be in a great form for the playoffs, we think that the home team is better and Mansfield have the better chance to win here.

Mansfield made some serious transfers mid-season and it worked like magic – they managed to reach the highest places in the league after a terrible season start. Their chemistry is in place and we believe that they have a better chance to win the playoffs than some other teams.

Northampton were also quite active on the transfer market this season although most of their newcomers were free transfers. They got several players from the Scottish Premiership and Championship, which gave them a serious boost up front. It will be shocking not to see Northampton get promoted after such a season but anything is possible at this point.

Top Betting Odds and Stats for Mansfield vs Northampton

FAQs regarding Mansfield vs Northampton 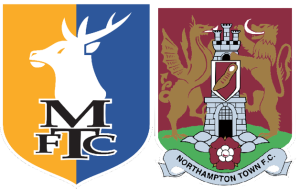 In which places did Mansfield and Northampton finish the season?

Both sides obviously were among the top 7 best teams. Mansfield barely made it in the playoffs and finished 7th with 77 points while Northampton had the unfortunate luck to finish 4th with 80 points.

This match will take place at Mansfield's home ground – the One Call Stadium.