Stevenage have to go through a difficult visit at Mansfield on their path to survival. The team is in terrible form and in serious danger of relegation.

Mansfield lost their position in the promotion zone a while ago and have been struggling in recent weeks. There is still time to get back to the wins and end in the playoff zone. This game against Stevenage is the perfect opportunity.

We generally do not expect goals from Stevenage but Mansfield's defense has been struggling, so it is also possible to see a goal from the visitors in this match. Overall, Mansfield have the scoring abilities to net three goals alone and Stevenage have been one of the weakest teams with the weakest defenses throughout the entire season. We expect a high-scoring game that will go in favor of Mansfield.

Mansfield's home record is outstanding. Ever since they turned their season around, they have been winning at home. At this point, they are at an 11-game winning streak in front of their own crowd. On the other end, Stevenage are one of the weakest away teams in the league and have won just a single game out of their 18 outings to date. We expect Mansfield to get back to the wins after two terrible defeats on the road.

Despite their poor performances overall, Stevenage have been taking a considerable number of corners this season. This is why we think that the incredibly low line of over 3.5 is the perfect opportunity for this match. Overall, the visitors have taken an average of 4.50 corners per game on the road this season. We think that they will manage to cover it even against such a difficult opponent.

Over the past 20 rounds or more than half of the season, Mansfield have been the most dominant side. We already mentioned that they have 11 consecutive wins at home and this now ranks them as the second-best home team in the league after the current leaders from Forest Green.

Stevenage have been struggling throughout the entire season and this is unlikely to change in the remainin nine rounds for them. They are one of the lowest-scoring teams in the league and they struggle against most opponents. They create a considerable number of chances but their attack has serious problems when it comes to finishing.

Top Betting Odds and Stats for Mansfield vs Stevenage

FAQs regarding Mansfield vs Stevenage 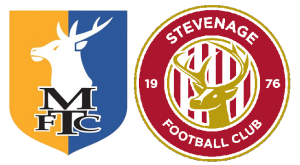 In which places are Mansfield and Stevenage?

Mansfield almost reached the top at one point but have now crumbled down to 10th place and have 56 points. On the other end, Stevenage remain right above the relegation zone at 22nd place and have 34 points.

This match will take place at Mansfield's home ground – One Call Stadium.