Mansfield take on Sutton in another crucial fixture from the 42nd round that could be a decider for the future of both teams.

Sutton have been going through ups and downs for months that kept them away from the promotion zone and the difference has been growing. Mansfield remain one of the best teams in the league and with one more win, they will secure their participation in the playoffs.

The first match between these two teams ended in a 2:0 win for Sutton but that was a different stage of this season. Nowadays, both teams have had a bunch of games with over 2.5 goals and especially with Mansfield's solid performances at home, we expect to see goals from both teams and at least two goals scored by Mansfield.

Both teams have had a good season overall but there are some subtleties in support of the Mansfield win. For example, Mansfield have been one of the best home teams in the league overall and in recent months, in particular. They lost a single match in their last 15 home games and they won a total of 12 out of those. No other side has had such an incredible run at this point while Sutton are also quite bad on the road. They lost three out of their last five outings too.

Both sides here take a considerable number of corners per game and we expect to see a good number in this fixture. For example, Mansfield have been quite active in their home games – the team took 6.80 corners in their last five home games while Sutton took an average of 5.00 corners in their last five away games. Both teams will do their best in this match and we can expect a lot of corners and attacking plays.

Mansfield started the season in a bad way and then changed entirely and had the most impressive series of wins out of the entire league to date. They quickly moved to the top of the league where they have been since then. The team needs at least one more win to feel completely safe in the playoff zone.

Sutton had a great start and looked like one of the main contenders for promotion this season but their second half of this season has been disappointing and their away performances are a big reason why they are now below the promotion zone. The team also lost the final of the EFL Trophy a couple of weeks ago and it seems like their motivation is not at its highest.

Top Betting Odds and Stats for Mansfield vs Sutton

FAQs regarding Mansfield vs Sutton 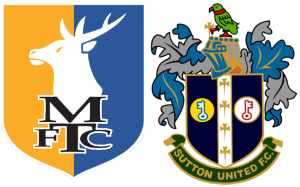 In which places are Mansfield and Sutton?

Despite the huge difference in places, Mansfield and Sutton are quite close in terms of points. Right now, Mansfield are 4th with 69 points while Sutton are 10th with 64 points. A win here for Sutton will put them next to each other in the table.

This match will take place at Mansfield's home ground – One Call Stadium.