In this betting preview, we look at the A-League fixture between league leaders Melbourne City and Adelaide United at the AAMI Park on May 13. While City lead the points table, United are trailing in third place.

Patrick Kisnorbo are the envy of A-League, scoring at will whilst putting distance between themselves and the chasing pack. City are now involved in a potential six-point affair and will be looking to end Adelaide United's challenge. They are unbeaten in seven matches, winning five of them. On the other hand, United are winless in three away outings, adding to City's chances at the AAMI Park.

The last two meetings between City and United have seen over three goals. City's recent record adds credence to this eventuality, with eight of their last ten home fixtures resulting in the Over 2.5 coming true. Couple this with Adelaide's record of nine successive matches of three or more goals. All the ingredients are there for a high-scoring affair for two automatic play-off qualifying contenders.

To get the last time when City failed to score at home, one has to travel back to January 25, 2020. The City Football Group affiliated franchise has not looked back since and plundered goals against all and sundry. Adelaide do not have the same pedigree as their much-fancied rivals but can hold their own. They have gotten on the scoreboard in six successive away trips, hitting the back of the net an impressive 14 times in this period.

After 20 rounds of A-League action, Patrick Kisnorbo's men have a nine-point advantage over the trailing pack. Not only do they have the best-attacking output in Australian top-flight football, but are also defiant at the back. This squad is stacked in all departments and should be able to improve on their last season's second-place finish. Chief to their cause has been the form of Jamie Maclaren, who has ten goals to his name from his last seven outings.

Adelaide finished last the 2020 campaign in a disappointing seventh place and barring a sudden loss of form, are set to improve on their showings this season. They are reliable at the back and cause threats from all angles when going forward. Craig Goodwin has been instrumental at the front, scoring five and laying down five assists. Fellow forward, Tomi Juric, has profited from Goodwin's abilities as he leads United's goalscoring charts.

FAQs regarding Melbourne City vs Adelaide United Coverage and Accessibility 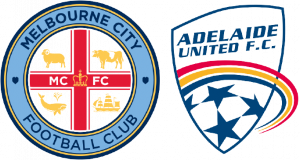