In this betting preview, we look at the A-League fixture between bottom-place contenders Melbourne Victory and Macarthur at the Marvel Stadium on Thursday, May 06. Both sides are contending for a playoff position as the season beckons on its second half.

Despite being on the road, the Bulls will be unfazed by the challenge of Melbourne Victory. Barring their exceptional 5-4 win over WS Wanderers, the hosts have struggled to impose themselves against their at home turf, failing to win five of their last six games. Macarthur are in similar territory but are unbeaten in their last three away trips. With the season entering its final stretch and their playoff qualification slot under threat, expect the visitors to pile misery on the Boys in Blue.

Owing to their poor defensive record, Melbourne Victory average 3.6 goals per game. Macarthur also has a negative goal difference and have seen 2.6 goals in each of their 20 trips. Interesting, both sides have seen the Under 2.5 in their last two games but the previous three had three goals or more.

The Boys in Blue have struggled for goals this season on the road but give a good account of their abilities at home. Contrary to their poor scoring form, they have only been shut out thrice at the Marvel Stadium all season. Barring the Bulls 0-0 draw on the road to Perth Glory, they had scored in seven successive outings. Irrespective of their recent poor form, they have enough in the tank to trouble the scorers.

Steve Kean has the tough task to ensure Victory do not end in tenth place for the second year in a row. Melbourne have been in fine form in recent weeks, winning the nine-goal bonanza against WS Wanderers. Against Macarthur, they will have the tough task of shackling Matt Derbyshire, who is A-League's second-highest goalscorer with 11 goals to his name. Nick Ansell and Ryan Shotton will be in the heart of the defence and the Victory stalwarts will have their work cut out for them.

In their debut A-League season, the Bulls have shown they will be a force to reckon with. Ante Milicic has forged a squad that does not let up. They were poised for a top-two finish but a run of five games without a win has dented their ambitions. A play-off qualification finish will be on their agenda with two games left in the season. Milicic has relied on Matt Derbyshire to deliver the goals and his barren form has coincided with the Bulls sliding trajectory.

Top Betting Odds and Stats for Melbourne Victory vs Macarthur

FAQs regarding Melbourne Victory vs Macarthur Coverage and Accessibility 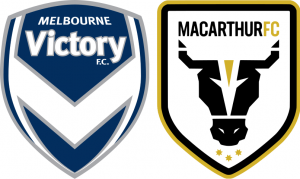 The match will take place at Marvel Stadium.