FC Minaj kickstarts their Ukrainian Premier League campaign against FC Oleksandrai. The visitors secured a 0-1 away victory in their opening fixture against FK Zorya Luhansk and will aim for a repeat result at the Mynai Stadium on July 31.

The end of last season saw FC Minaj lose their last five matches in succession. As they begin the new campaign, the odds are stacked against them with FC Oleksandria visiting them. The Citizens won their first fixture comfortably on the road against FK Zorya Luhansk courtesy of Ivan Kalyuzhny's first-half strike. They have won their last two meetings against Minaj and should be able to make it three given their rival's poor form.

Oleksandria are not great scorers but neither are Minaj. The latter scored a paltry 16 goals across the whole of last season, and expecting much from them will not be fruitful. Both teams finished last campaign without much to show for on the attacking front and had a negative goal difference. As they face off each other in this Premier League fixture without a concerted preseason, expect a low scoring affair that should conclude in an Under 2.5 goals scoreline.

In four of their last five competitive outings, Minaj has failed to get on the scoreboard. For Olesksandria, both sides have failed to score on three occasions across the same period. Given Minaj's poor showings in the previous campaign and without substantial additions to their numbers in the current transfer, expecting them to rectify their ways is improbable.

Three years after hanging up his boots, Vasyl Kobin is at the helm of his last employers. He has the tough task of getting them back to winning ways, a tall order given the fact they completely forgot how to score in the last campaign. To make matters worse, they have not had a proper preseason with just one club friendly to get their bearings right before the start of the campaign.

While FC Minaj has uncharacteristically not opted for club friendlies, their rivals for Saturday have not skipped on it. The Citizens have been involved in five friendly encounters, using that experience to overcome the challenge of Zorya Luhansk in their season opener. They have a leg up in this meeting but will need to force the issue as their attacking instincts remain suspect. Young Ugochukwu Oduenyi has been handed the number 9 shirt and it remains to be seen if it is the right decision.

Top Betting Odds and Stats for Minaj vs Oleksandria

FAQs regarding Minaj vs Oleksandria Coverage and Accessibility 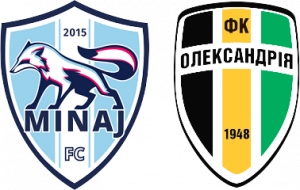 Who is the favourite to win?

Oleksandria have bet on the talents of Ugochukwu Oduenyi to lead their lines in the Ukrainian Premier League. The 20-year-old Nigerian forward is still wet behind the ears but is held in high regard at the CSC Nika.