Monza will face Brescia in the second and last semi-final bout in Serie B.

Monza beat Brescia shockingly last week and the visitors will have to go through hell if they want to continue to the final round.

Both Team To Score – Yes

Both teams scored in the first match – that is a fact – and we expect to see the same result in the second leg too. Both teams are among the top sides when it comes to scoring goals and while Monza are unbelievably good at home, Brescia have nothing to lose and will go all-in into this match. We expect at least a 1:1 at full time although we might see more than one goal from either side.

While Brescia will have to be at their best and even better to win this playoff series, Monza are one of the top sides at home. They won four of their last five home games in the league and conceded a goal only in a single fixture, which ended in a draw. Brescia have been having serious issues on the road since February this year and have not won an away game in seven consecutive fixtures. The draw is highly possible in this match, which is why we prefer the DNB.

Monza had a great season overall and managed to finish in the semi-final zone instead of Brescia. The team is the second-best attacking side with 60 goals in 38 rounds in the regular season. They also have one of the best defenses in the entire league and conceded 38 goals in 38 games. They have great chances to pass to the final round.

Brescia had some disappointing results that put them a little bit behind in the final few rounds. At one point, the team was at the top of the league and for months, they were one of the two or three main contenders for the title. They have the 2nd best defense in the league but their attack is not among the best. We expect a strong final match from them but we think that Monza will prevail and qualify.

Top Betting Odds and Stats for Monza vs Brescia

FAQs regarding Monza vs Brescia Coverage and Accessibility 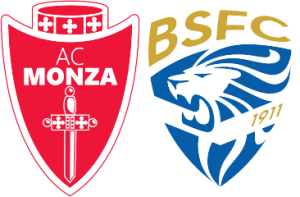 In which places did Monza and Brescia end the season?

Both sides finished in the promotion zone and exactly next to each other. Monza finished at 4th place with 67 points while Brescia remained 5th and had 66 points.

This fixture has been scheduled for Monza's home ground – a stadium called Brianteo.